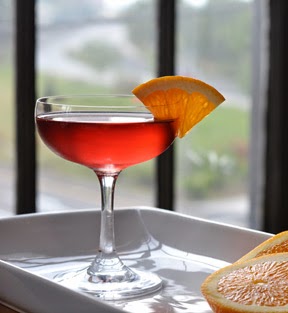 I met a delightful person today who claimed to love bourbon. Favorite bourbon? Bulleit Rye. "How do you like it?" "In a shot glass next to my beer or in a Boulevardier."

I adored this answer partly because it sounded honest and true, and partly because I had not heard of anyone drinking a Boulevardier in ages. It's one of those Negroni bastards you unfortunately don't see around very often, but it's a delicious cocktail and one worth exploring. Also, documented references to this drink predate the Negroni, which I find mildly interesting.

I have had it in a cocktail glass, but I prefer brown spirits in a rocks/old-fashioned glass for purely aesthetic reasons.

So, this person and I are going to get dressed up in the middle of the night, go to a whiskey bar, and order Boulevardiers. I'll take pictures.

Also, there's some controversy regarding Campari. So here's a link to that if you care about controversy. My personal take is I'd rather eat as few bug butts as possible. I mean, there's an acceptable amount of insect parts in everything we eat, but yeah, I prefer not to jump in and eat them on purpose. I don't see it as a betrayal that a company might change its recipe ever so slightly every hundred or so years either. Times, tastes, and what's acceptable to stick in one's mouth change, people.