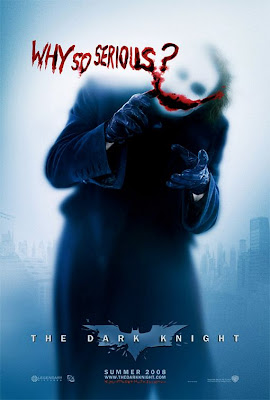 Everyone's talking about this movie, and it's no surprise. After the death of Heath Ledger, everyone decided they would see "the Dark Knight" no matter what. I saw it in the IMAX over the weekend.
It was good to see it in the IMAX because there are more explosions and vertigo-inspiring city flyovers than any movie I've seen for a long time, and the IMAX makes the most out of bass-heavy bombs and helicopter acrobatics. I liked that about this installment of the Batman franchise, but unfortunately, it doesn't offer much more.
Sure Heath Ledger is amazing. But you can't help but think "poor fallen star," and even the best performance can be usurped by what a production lacks. And this production lacks a bit more than it should.

There's a lot of time spent with Gary Oldman, Aaron Eckhart, and Christian Bale hanging out, giving it their all, but no one wants to hang out with the good guys and have tea, that's why episodes of Scooby-Doo cut away when Fred hatches a scheme to catch the villain. We don't care about what they say in those huddles. Christian Bale talks like a man who's gargled razor blades when he dons his cape and cowl, and that gets kind of annoying because we have to listen to so much of it. The kind of pow-wows Gordon and Batman hold only work in comic books, and even then, they are quite short. No one wants to hang out with Batman; we want to see him do things. Bruce Wayne is the talker, and everyone can't wait for him to put the suit back on.

Christopher Nolan wrote the screenplay with his brother, which is a mistake. They co-wrote "Memento," too, and the two films suffer the same problem: lack of dramatic climax. "Memento" is a very intense movie that grabs you, takes you for a crazy ride full of suspense, and then lets you off. It's like a roller-coaster. "The Dark Knight" is the same. Movies aren't roller-coasters; we like to be left out of the good guys' plans so we are surprised when they unfold, we enjoy rug-pulling and climactic shifts in narrative and denouements. Where "The Dark Knight" lacks these, it makes up for them in great performances and big explosions, but that can't fool everyone for long. Once you leave the theater, you've got to recuperate and come to, and once you do, you realize that it wasn't much to write home about.

Batman also gets TV's in eyes, which is incredibly lame. I am not sure what he hopes to see with those TV eyes, but I don't think he could fight with them on.

The last problem with the film is that there is nothing beautiful in it at all. Kim Basinger was enough for the first Tim Burton film, and Michelle Pfeifer was good for the second, but what have we got in this one? Maggie Gyllenhaal. Many people think she's cute, and sometimes she is, but in this flick she is haggard. They make her look like a D.A. who has been working day and night to fight the mob. She looks like Marcia Clark after the OJ Simpson trial except in even less flattering attire. I think she needs a better agent or something. And she's our only shot because everything and everyone else in the movie is ugly and disgusting. That's why action movies have starlets in them; if you ever make an action movie, make sure you have a starlet.

I think the reason a lot of people are loving this movie is because Heath Ledger gives us the best Joker anyone has ever seen or even thought of. Every person who read the comic has no choice but to point at the screen and say, "they finally got it." I think comics will now look to Ledger's performance when they write new Joker issues, meaning that he has become an instant iconoclast. He has changed the way generations will see this character, a character whose popularity has never waned and probably never will. It adds to the tragedy of his death and maybe a bit of glory to his legacy.
Posted by Sky Jack Morgan at 3:16 PM

I really agree with you about the film's major flaw. The ending is kind of mediocre. The two barges thing didn't do anything for me and no matter how that scenario played out, it was going to be hackneyed.

The Batman sonar thing was lame and not visually stimulating at all. I guess you could make some argument that Bruce Wayne is falling more into being a bat than a man, and say that his use of sonar represents his slipping humanity as he becomes all vigilante, to the point that he is actually beginning to see like a bat. But that sounds like something that belongs in some lame Berkeley English paper...

They built up Two Face, and he didn't really do anything. I don't know they did all this shit and it just felt like something AWESOME was going to happen and he didn't have anything up his sleeve for the finale.

I think Maggie G is hot. I beat it to her recently.

LOL.
I think she is a beautiful person, but she looked rather ragged in this flick.

The Sonar thing was also lame because we saw him take on a whole team of ninja in the last movie. He can't take on a couple schizophrenics in this one without super soldier tech?

And where does he put his mine throwing gun when he's done with it?

2Face could have been cool, but they crammed it all in at the very end, and then Batman kills him. Batman didn't kill Joker because that would be wrong, but he has no problem tossing 2Face off the roof? I wish they just dropped that thread and waited for the next movie. Have the hospital blow up and we "wouldn't know" what happened to Harvey Dent until part 3. It was just lame this way.

It was like everyone was working with a shit script and even though they were all great/seasoned actors, no one spoke up. I mean, Michael Caine actually says nearly the the same thing twice to Bruce Wayne about what he should have expected.

It's just maddening to think that they didn't hire someone to tighten the dialog and patch up the plot.