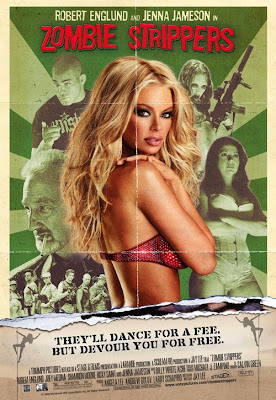 Sometimes movies come out that are so ridiculous, they are fun to watch for their ridiculousness. Grindhouse tried to do it last year, but people go to Robert Rodriguez and Quentin Tarantino movies for highly stylized visions, not B-rated mayhem and comedy with big star cameos, which is why I think it failed so miserably to catch an audience despite being pretty cool.

I love seeing zombie movies at the Parkway in Oakland. I think Zombie Strippers might be my fifth. I dig the beer and pizza and lack of teenagers, and I love the fact that they have vegan pizza, and I enjoy the sense of community there. It seems like a small neighborhood theater where you meet your friends and run into people you didn't expect. The Parkway is definitely a place where people come for a movie-going experience, not just a movie. You aren't asked to be a critic or a box office number; just enjoy the show. It reminds me of drive-ins in a lot of ways.

Zombie Strippers was awesome. Such a movie was made to be experienced in a theater on a big screen with plenty of people to crack up at the ludicrous parts and shiver at the gross parts. Jenna Jameson makes a good zombie, and Robert Englund is always a pleasure.

A perfect movie for the Parkway.

Afterward we went to the dock at Jack London Square and looked at the moon with the ancient free telescope and listened to the thunderous containers.
Posted by Sky Jack Morgan at 1:05 AM