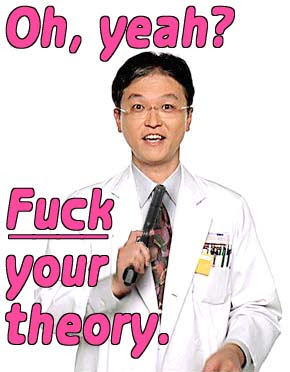 Someone said this to me yesterday:

"As an artist, if I know that someone doesn't know the rules, I just can't respect their work."

There are no rules. There is only theory. If you choose to apply that theory, that's up to you. In any art, the theory is only there as something to consider if you want to. Theory is fun sometimes. But it is not a rule. People who say "wow, that guy breaks all the rules" are not really saying anything. They are making sounds with their mouths that don't make any sense.

People who have studied theory like to talk about rules. But people who study theory come dangerously close to being critics only. It's hard to be a critic and an artist at the same time. If you believe in rules in art, you probably are not an artist. If you start sentences with "as an artist" with any degree of seriousness, you probably aren't an artist.

But fuck your rules.
Posted by Sky Jack Morgan at 11:39 AM