Last Night MAPP Was off the Poetic Chain, Mang! 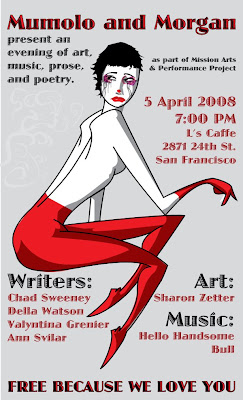 Last night was MAPP, and it was our best yet, I think.

Valyntina Grenier opened the event with a splendid poetry reading, and she sang, which was much more enjoyable than I thought it was going to be when she told me she was going to sing. Usually when poets tell me that they are going to sing, I roll my eyes and thing that I am in for some torture. But V has a lovely voice, and I think it worked perfectly with her poetry.

Our first musical act, Sarah Melfy of Hello Handsome, was next, and she was phenomenal, I do say. I was dancing, and I saw plenty other people in the audience wiggling their heads and getting happy feet. She added a great deal to the already fantastic vibe of the evening.

Chad Sweeney was up after that, and since everyone knows I think Chad is one of the bay's best poets, I won't say too much. He has a new book out called An Architecture, from which he read, and I loved his chapbook, so I expected a great reading from him. He didn't let me down, and people were coming up to me and wondering why I haven't told them about Chad Sweeney. I told them they should read my blog more often.

Ryan Partridge played a set as the one-man band, Bull. Pretty intense. At this point, I couldn't believe how well everything was going. We had TWO great musical acts and THREE great poets. Was this really happening, were we really going to pitch a perfect game? Was this thing really going to go off like this? Ryan's act was extremely impressive. I mean, one-man punk band. Well, kind of punk. Kind of rock. You had to be there. But forget about the one-man bands you've seen before. This is not some folksie guy with a washboard on his chest.

Ann Svilar read fiction, which often doesn't fly well at readings, methinks, but here it worked wonderfully, as her fiction was rather delicious and her delivery was charming. I must say, a pleasant surprise and a refreshing change from what I have come to expect from fiction readers, which is much lower than what I expect from poets.

Then, finishing up, was Della Watson, whose poetry has thrilled me since I discovered it at a previous MAPP that I didn't co-curate. I read at the same event she did, and she is awesome. You can find her work in the last issue of The Hat. I think she's one to watch fo sho. The audience was moved to spontaneous applause more than once. A rare treat, that.

After the reading, I went to my friend, Carl Pisaturo's show. It was one of the coolest art shows I've ever been to, and why the MOMA hasn't given him his own floor there is a unsolvable mystery. Who is running the MOMA these days? People were talking Burning Man there, but I think Burning Man is beneath Carl. If you come to the next MAPP, I will take you to Carl's show. It's be in about 60 days. Until then, check out his site, which does not do his work justice at all.
Posted by Sky Jack Morgan at 1:57 PM

Email ThisBlogThis!Share to TwitterShare to FacebookShare to Pinterest
Labels: Murder, poetry reading, POETS DO IT BETTER.