STAR TREK CAN STILL BE FUNNY 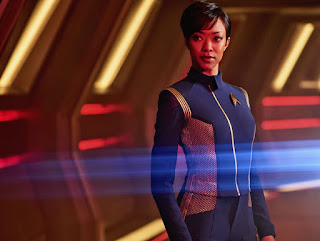 
In the episode What's Past is Prologue, we get a mixed bag when it comes to story-telling.
There's a ton of awesome action sequences with the rebels' weapons turning people in to vapor and the Empire felling rebels with one hit. A couple surprising head shots sneak in there, and Michelle Yeoh finally gets to open a can of whoop-ass with some martial arts and sword through Lorca's heart through his back. That sword was a Chekhovian pistol for a few episodes now, so that was satisfying.

I love that the rebels are as bad as the Empire in this series. Our Star Fleet heroes are stuck in a war where both sides are crap. What about the war they're fighting back home?

And throwing Lorca into the Moon Door a la the GOT Eyrie was pretty great too, as he disintegrated in the fall. What a way for a captain to eat it!

Speaking of eating it, the cannibalism/animal rights sequence was kind of intense and perfectly suited for Star Trek. I've always loved that Star Trek asks interesting questions about what it is to be human when we are far away from Earth.

There was a lot to love about the last few episodes. But I think there was something severely lacking: Humor.

There was a stretch where all the beats were off that could have used some humor to help it, too. When they're tracking Burnham through the communications link she's using, she pulls out a bit of fiber optic cable, and just when they think they've got her, they say she'd rerouted blah blah blah, so they can't find her. I feel like Lorca could have said something there. "Clever girl"? "Resourceful little bitch"? "She always was a slippery one"? Any of these could have worked with his character and would have been hilarious.

And the writers seem to get this in other parts. It's very funny that they're all talking about not believing in no-win scenarios in their ridiculous conundrum. Of course this is because the Kobayashi Maru hack Kirk pulls off and the switcharoo he uses to trick Kahn haven't happened yet. Did Kirk meet Commander Saru? I hope so!!!

The worst beat was when Michael manages to hack into the communications network and contact Discovery and she's told the entire multiverse, all of existence, "life as we know it" is about to end if they're not successful. And she just stares.

She could have said "those are some high fucking stakes" or "is that all?" or "I guess we better hope this shit works" or "if we do fail, at least no one will know." Anything! There would be some substantial gallows humor when it comes to something as dire as this. And they've already shown they're not afraid of a little cursing.

Anyway, I love this show. It's so much better than what's happening in the Star Wars universe. It's opening itself up to some really cool story-telling opportunities, but I hate it when they miss those opportunities, too. I mean Why So SERIOUSSS?!

SHUT UP WESLEY!
Posted by Sky Jack Morgan at 1:29 PM

All of existence? OK, that's a little funny. I laughed a lot when they said that. Like, we've seen the Federation save planets, civilizations, even whole races, but the entirety of existence? LOL