Have you seen Girls Trip? 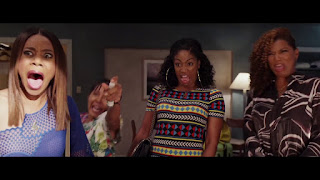 What I like about this film overall is that it's not a "black movie." And I mean to say that this is the GET OUT of comedy. It's not a film about racial stereotypes, but it's a film that doesn't ignore them either. It's a good movie if you like raunchy comedies that deign to attempt to transcend their genre.

Think Farrelly brothers at their best meets Ice Cube at his best.

Every time it panders to the lowest common denominator with piss or penis jokes, it buys you back with a lesson about loyalty and sisterhood that comes off as genuine because it's not acknowledged until the films denouement, which is predictable, but worth it.

There's even a stupid trope about the dangers of absinthe sold in a Michael Epps cameo that's derivative, but everything in comedy is just another cue telling us when to laugh, so it's excusable or at least as excusable as when they did it in EURO TRIP. It's a hallmark of the genre of buddy trip comedies, and they do it well enough.

I think it's the only decent comedy I've seen this year, and that's sad since this country needs it so much right now. Maybe this country always needs it.