Have You Seen Logan Lucky? 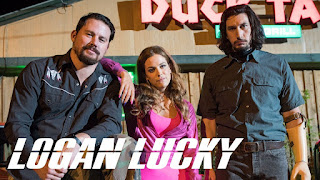 Logan Lucky is a little heist film that will remind you of Ocean's 11 for more than one reason.
I had to go to Red Rock Regal in order to see this one because it wasn't playing at the spot by my house. But that's OK, it's a great cinema.

The plot revolves around West Virginians who are pretty spot-on when it comes to West Virginians that I've met except better-looking, a little easier to understand, and not one racist amongst them.

One's even a wounded veteran.

I had to see this because I'm a fan of Soderbergh, who basically reinvents himself every time he makes a movie but has a recognizable ludic aesthetic if you're really looking.
If you like fast cars, crazy plot twists, and funny dialog in your expert heist flick, this is for you. It's a great night at the movies.

The only thing I didn't like was Seth MacFaralane's weird Englishman energy-drink-owner, who was way over-the-top and too conveniently ass-hole-ish. He was too much for me and ruined parts of the narrative. Funny enough, Daniel Craig plays an rural American effortlessly to the point you forget who he is almost immediately. There's talent for you.

But there was one sequence in which the daughter performs for a pageant: touching and sad on so many levels, it makes you wonder what you're "supposed" to be getting and then not care because it's an emotional moment that serves as a kernel of a soul and a reminder of what's at stake for a summer-fun heist flick.

It kind of reminds me of Cohen bros. at their best meets Steven Soderbergh. Is that fair? Who cares? It also reminded me of Smokey and the Bandit and another awesome car/heist movie Baby Driver. I'm glad I caught it in the cinema.
Posted by Sky Jack Morgan at 10:05 PM