St. Pat's and Clover in Retrospect 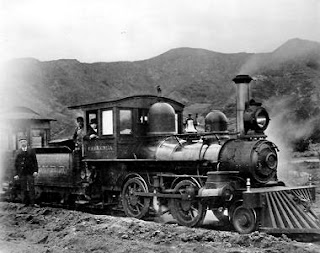 Poet, vegetarian, and tender of bar, Sara Mumolo, invited the whole trainwreck to party with her at Ben & Nick's in Rockridge last night for St. Patrick's day. Some random guy we've never met before wants to know about the Trainwreck Union. Heard we were it. FBI?

Pablo voted in the street.
Sisters Hamel, Sweet Caroline and Gillie-Sue, made grown men cry.
Jack was constantly in the way.
Ashley was in need of constant dotage.
Jason, Casey, Mo, and Sara Mumolo started a gang; they jumped us in, and we were all able to leave together safely. It doesn't seem possible, but no one fell, and no one fought. No one cried, and no one read an entire poem. 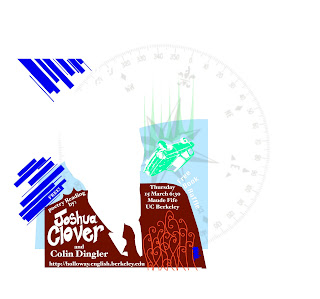 There are pictures somewhere with some of us drinking green Trumers.

Arron Pawlowicz had green teeth.
=====================
Something about Joshua Clover:
Did anyone not like that reading? I love it when poets have arch enemies and friends in high places about whom they are never afraid to write. Setting friends up for public humiliation is always hard. Putting everything on the line just to see what happens is always thrilling for audiences.

I was fortunate enough to have dinner with Clover, Altieri, Bernes and other great minds after the reading. Putting people like that in a room together creates a palpable electricity. One might say it's shocking. I'm not very smart, but I know when I am around genius. Affect Affect Affect. Tons of affect. Post/late/postpost/pre modernity. Bull shit terms and categories annoy me, but hearing big shots using the undefinable makes me feel like less of an ass hole for doing the same thing.

Clover's goals for the evening were to exhaust all of Jorie Graham's budget (she's coming very soon) and wield words. He took one goal seriously. He told an amazing urban legend about John Ashbery, that is, I totally dig the idea of John Ashbery pulling a rock-star move by eating and drinking a year's worth of Holloway money in a single night. We discussed Weltsystemaffekt , string theory, and the latest horrible films. The guy's knowledge base is so wide, it's difficult to keep up at times, but it is always fascinating. . . much like his poetry.
Posted by Sky Jack Morgan at 10:57 AM