A Day with Kites; a Night with New Yipes 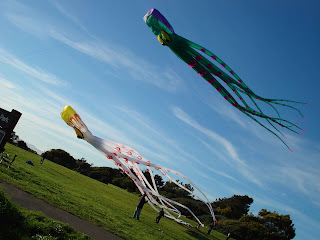 At the Berkeley Marina, hung over but spry, the Trainwreck Union recuperated after St. Patrick's day and the previous Friday. Everyone said things like, "how have I been so stupid not to have come here earlier." We flew kites and lay in the grass like there was no war on. There was a big rally going on somewhere, but isn't flying kites and going to a reading a protest too? "My God, what a beautiful day!" was another thing people kept saying. So Wordsworth, really. 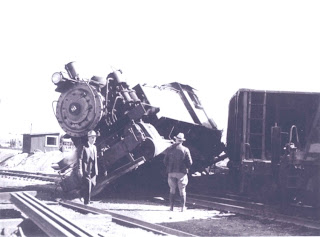 Then, to change gears, it was time to trek on down to 25th and Broadway to my currently favorite space: 21 Grand.

First up was Armand Capanna, and if you missed it you truly missed out. If his piece was 2.3 min. shorter or 7.5 bpm slower, I would have loved his work. The way he did his thing, though, I just really, really, really liked it.
A while back, I wanted to propose a research project that involved comparing Chicago Renaissance poets to current Chicago poets. I thought, and still think, that it is a shame that we on the west coast tend to ignore what is happening in the middle of the country. Capanna's work encourages my curiousity regarding Chicagoan poets. He uses references in his work that make one think, "shit, I've heard that somewhere," but it doesn't scream at you. It kind of pummels you. He has a machine-gun way of reading that reminds me of my clubbing days when D&B/Ragga/2step was the thing to dance to in Europe. Drum and Bass lets you stop and breathe with frequent bridges throughout extremely long tracks, but Capanna doesn't let up. You couldn't dance all night with Armand Cappana, but there's something there that is impressive and exciting. Maybe with a bridge,,, a breath?
There was a video playing behind him that grossed out Lisa Robertson until she squeeled with glee, but what made me nearly squeel with glee was the fact that a poet was setting his life upon a cast and standing the hazard of the die. I realized, I want and expected more than I should from poets like Greenstreet. But if you're going to go up and "bear your soul" then fucking do it. If not, stay home. If I need to go to Chicago for more knives, I'll go to the fifth ward no problem. I hear the Zephyr is the greatest train route in the world; it starts in SF and ends in CHI; let's go.

There was a video by Sarah Lockhart that was super cool; it was called "Suburban Guerillas." It had a soundtrack that wanted to eat everyone alive. Totally dug it but can't write about it.

Dodie Bellamy. Everyone loves Dodie Bellamy. She was following some high-energy shit, though. Her piece was awesome but a little anticlimactic after the full-steam-ahead stuff.

All around a fantastic Sunday. Got to hang with the union reading Graham Foust beneath the giant kites, go to one of the most kick-ass spaces for poetry in the bay, name drop with the likes of Clayton Banes, whom I kind of worship at the moment, and we all only drank one beer and got home by 2am (EARLY!). A great freaking day. Thanks Trainwreck Union and New Yipes!
Posted by Sky Jack Morgan at 12:07 PM

Email ThisBlogThis!Share to TwitterShare to FacebookShare to Pinterest
Labels: kites, octopus, poetry reading, the way things ought to be.