Which Bourbon Should I Buy My Pool Shark?

Reflections on 3am, The Hustler, and J.T.S. Brown
Guest Blog by Kevin Kunundrum 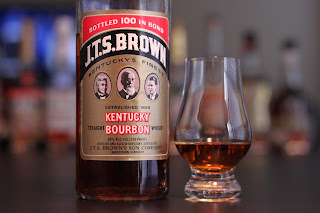 Sometimes there are surprises on the bottom shelf.

I’ve been thinking of the Paul Newman movie, The Hustler. Early 1960s—glorious black and white. The seedy stark monochromatic reality of life on the other side of the tracks. The anti-hero who gets so close but then self-destructs.

And then it’s that trip through the Underworld anyone who tries for something more must face: A landscape of fire and shadows and clouds of smoke.

And from one of those clouds, Paul Newman’s character Fast Eddie Felson says to the bartender “J.T.S. Brown.” 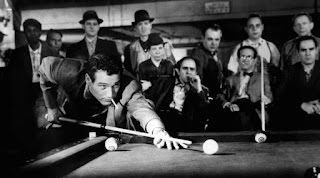 Time is out of joint. Civilized society is fast asleep or just waking up while Eddie lives a parallel life in a penumbral Purgatory. And sometimes he can see their world, he can almost touch it, but he can never break through. He’ll always be a part of life after dark and smoke-filled rooms and plaintive jazz by Negroes who still feel slavery and pool halls and prostitutes and 3am bars and men who swim about like sharks in the shadows looking for that next meal.

And there’s that hollowness they all share, that they feel but never stand still long enough to face.

They’re sharks after all. And they pull another Lucky from the pack shaped by their pocket and motion to the bartender with the tip of a lit cigarette, “J.T.S. Brown.” The poetry of this place, the economy of words as the drink appears, straight, no chaser.

And Fast Eddie gazes into the glass like temporary absolution. The hollowness is still there. The wound that never heals, what men feel for being alive, for being men. And Eddie looks at the bartender and once in a great while he’ll say,

And the bartender offers a nod and pours another round. And now and then he’ll say, “On the house.”

And Eddie nods back as if he’s been given a reprieve. The promise of sunrise, straining, bleeding through the smoke-stained glass. Maybe today…

All this was on the bottom shelf in the liquor store in that bottle tucked away. This time traveler from 1960. J.T.S. Brown. Kentucky bourbon that’s smooth and strong and better with each glass. This companion to the hollowness. This poetry of shadows that somehow holds us together.