What Should I Buy for My Bourbon Drinker


If you watch the video above, you might get why I like this bourbon so much. Anyone who thinks Tito's is handmade should take a look. I don't have a personal romantic story to go along with this except I drink it a lot with friends. This bourbon comes with its own story. This is the real deal. This is old-school American craftsmanship at its best, but you get to put it in your mouth and consume it! You can't say that about fancy cars, Jerry Seinfeld!

First up, you see. You see the barrel-shaped bottle with its parchment like wrapping. On closer look, you can see where someone has handwritten where the juice in this thing comes from. And there's a little horse on top with letter by its back leg. 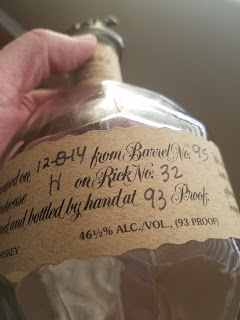 It's a magical drink, and it's not the same for everyone. You see, a single barrel means each batch is slightly different and will never happen exactly the same way again. Now, there's something to be said about the incredible talent some masters possess to create the same bottle over and over again, year in and year out, but there's also something worthwhile knowing that after you're done with some Blanton's bottles, that's it: a unique experience you'll never track back down.

A colleague asked me before Christmas what he should get for his friend who is a bourbon-drinker, and this is what I suggested. He went with the easier-to-find Angel's Envy, which is a fine bourbon. But if you want to make someone feel special. . . or better yet, make yourself feel special, buy a bottle of Blanton's.


A short word about the horses:

When I worked at MGM Grand, I helped work a bar called Whiskey Down. Some bartenders there collected the stoppers because they spell BLANTON'S when you collect them all. You can even buy barrel staves with pre-carved holes into which collectors might insert and display these stoppers.


I'm not a big collector of things, but I have a few of these stoppers, and now I feel like a schmuck not having collected them. I've got a couple N's that are different from one another, which means to me they change these horses fairly frequently, adding to that uniqueness. They're small and easy to forget about in a drawer. Maybe when I get a few more, I'll buy one of those staves. I just found one on Amazon I want: