This Isn't a Dream 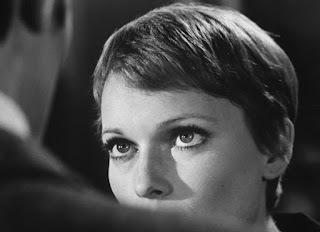 Every time I say "this isn't a dream; this is really happening!" I expect everyone to get the reference and at least smile. But I guess no one has ever seen Rosemary's Baby.

Those eyes of hers.

There's a whole subplot spoofing the film in the Seth Rogen movie, This Is The End, and I don't think most people get what he was doing there.

Cultural touchstones aren't what they used to be. . . I don't think they even really exist anymore. Or if they do, it's for such fleeting moments that they're forgotten before they accumulate any weight. Maybe that's why we're still talking about Hamlet and other stuff made by men long dead.

Maybe we can just appreciate how pretty Mia Farrow was back when people still cared about the future.

If you haven't seen it, watch it.

Tomorrowland at Disneyland used to be about what the future might look like if we all just work our hardest and try our best. I was employed there when they announced that all plant life in Tomorrowland was going to be edible. Innoventions was the newest attraction.

Now it's all about Star Wars.

Star Wars is not about the future; it's a fairy tale set in space so it doesn't have to obey the laws of our physics. It's not a shining beacon toward which we might strive; it's a romp in the stars set to orchestral swells.

I don't feel like ranting about Star Wars today.
But does the future matter anymore?
Are we treating reality like a dream?
Maybe the future doesn't matter, but shouldn't it?

I still care about the future.

It was all a dream; I used to read Word Up Magazine!!!

I love this, Jack! Cultural touchstones have now become really "in" jokes that a select few still get. But fuck the rest of 'em! Perhaps the future is in the past. Whatever that means. "The future is now!" (Coen Bros reference) "Remember the future." (Nektar) "The past is not dead. The past isn't even the past." Or something like that from ol' Faulkner. Tomorrow never knows... here comes Ringo's sic beat! Yeah...