Working at abar means you get to try out some cool things you find on the internet. I found a flaming margarita on the web, and I just had to try it. Of course, legend has it that flaming drinks are against the law in Clark County (Las Vegas), so I can't serve these, but they're still pretty cool. 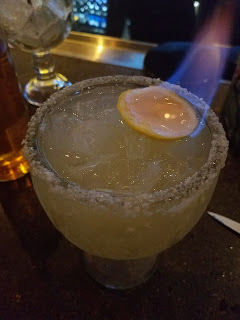 I made a normal Cadillac and peeled the rind of a lemon and lime and poured 151 Cruzan Rum in there and lit it on fire. Don't put a straw in there, because you'll melt it!

This is something like 1.75 Azunia Reposado, .75 Triple Sec, fresh sweet & sour, and .5 - .75 Grand Marnier. I can't actually remember the exact measurements, but this isn't really a post about cadillac margaritas. It's about lighting shit on fire! 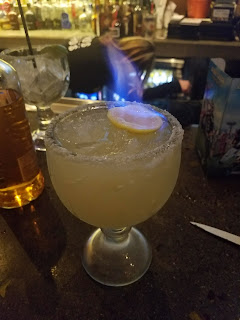 Also, I think it's ridiculous we aren't allowed to serve flaming drinks in Las Vegas. Plus, I keep looking for the law online and can't seem to find it. I don't actually believe it's illegal.

Dunk the fruit before you sip, and the rum gives the margarita a nice float of woody sweetness and fire. Not just something for the eyes, it really gives the drink a little something extra that I like.

I guess I could have used a high-gravity tequila, but I thought the rum would be a nice touch especially with the Grand Marnier float already in there. They mixed nicely, and I highly recommend this version for quiet nights with friends, far away from the long arm of the law.