Have You Seen Top Five? 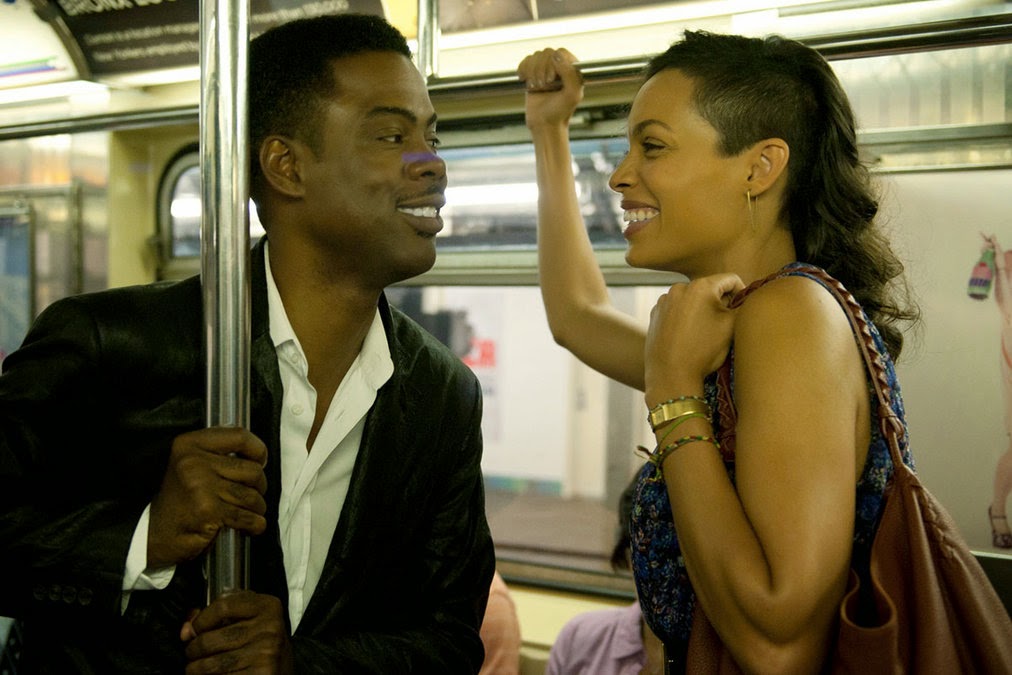 Let's face it: most comedies suck. I mean, they might make us laugh, but most of them appeal to our basest tastes, filled with dick jokes and gross-out humor. There's a little of that in Top Five, but at least it has a heart, and it's charming as can be.

Remember Adam Sandler's Funny People? It's kind of like that except it's also a romantic comedy. And it feels realer in a lot of ways. Alcoholism plays a major role in the film, and it's a fair depiction of the fight against addiction, I'd say. There's some weird butt jokes that seem weirdly sex-negative and even homophobic, but it plays because the characters have all sorts of hang ups. The characters are good depictions of the contradictory efforts of Americans. "I don't care what Michelle Obama says; fry or die." Chris Rock's Andre Alan wants to be famous but only for the right things. He wants to be brave, but he's afraid to do almost anything he's already loved for. Rosario Dawson falls for duplicitous men but is a duplicitous man (it's a spoiler if I say more). Rock is surrounded by friends who want to save him but also say he's only funny when he's drunk. I'm a giant fan of contradictions within people and our culture. This film explores that.

There's even a scene where Rock pays to jump rope with kids in the street but is too afraid to jump in. Rosario ends up jumping in for him, launching her character dangerously close to MPDG territory, but she never ends up quite so manic or quite so pixie to go all in and lose the verisimilitude.

The title refers to an in-joke that owes its roots undeniably to High Fidelity (the book--let's forget the movie, shall we?). It's an answer to the question "what are your top five hip-hop musical acts?" Even Jerry Seinfeld gets his answer in with a credits cut scene.

When Adam Sandler, Whoopie Goldberg, Jerry Seinfeld, and Chris Rock are all at a strip club chatting about marriage, I just wanted a whole movie of that. In fact, I wish Robin Williams and Billy Crystal were with them. There's also a part on a subway or bus where Rock is talking about his favorite comics, saying he wished he hung out Bill Murray and could talk about him like they were friends. Seriously, there are gems all over this flick that make it rewatchable and just a down-right charmer, scenes that leave you wanting more. That's hard for a writer to do, and Chris Rock does it with casual grace.

Comedy doesn't come like this enough. This film points boldly at what the genre could offer. And I'd even go so far as to say that it shows us what a multi-cultural cast could do for our culture. This isn't a black movie or a white movie. This is an American movie, and I love it for that. In Jerry Lewis's book, he says he always wanted what Chaplin had: Pathos. He wanted to be able to tug at your heart with comedy, maybe even make you cry. Who would think Chris Rock would have it?

And if that's not enough, DMX has a cameo that is as funny as anything you'll see this year. Brilliant stuff.

If you haven't seen it, please do so in the cinema. Your dollar is your vote for more of this.

This is the second beautiful comeback I've noticed this year. Maybe there are more. Let me know if you can think of one in the comments. I'm thinking of John Wick here. Is Sandler going to come out with something decent out of nowhere? Are we finally in a decade with good movies again? Are the studios finally as desperate as they were in the 70's and are beginning to allow our auteurs a little freedom? Let's hope so!

Give me your top five. Plus, are there any surprise comebacks I've missed this year?