Thoughts on the Napa 2014 Quake 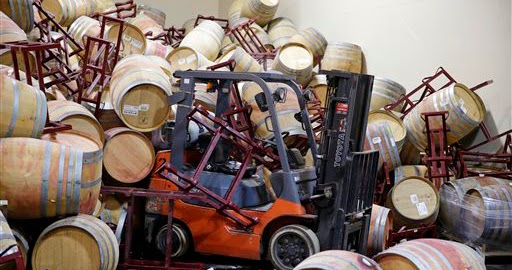 By now you've heard of the 6.0 Napa Quake in August costing businesses there a conservative $80,000,000. It's probably a lot more. Firstly, let me just say to all those idiots out there who keep saying 6.0 ain't no thing: It is. I grew up in LA and went to school in The Bay, and I will tell you, a 6.0 is major. Half the structural damage you won't notice for years, and you're lucky to have lived through it. And if you're a collector of little glass figurines, and you've put thousands of dollars and years of your time into the collection, imagine how you'd feel picking up its shards. Now imagine if that was a massive cellar of aging wine you'd planned on selling as part of an investment strategy for your business, or worse, retirement.

But that's not even the worst of it. You might have harvested and crushed and aged for a year. You were about to bottle to make room in barrels for an October harvest. Too bad; you just lost your 2013 batch. And if you'd already started on your 2014, tough break, kid.

And all of that is why I think Napa wines will be 15-30% more costly from 2013, 2014, and maybe even 2015. And that is probably mostly going to be on the shelves because wineries have already maxed out what they can charge tourists in Napa (they've been fleecing visitors more and more each year).

On another note, I hope there will be a cool factor associated with 2014, maybe even collector's edition bottles commemorating the great quake. I personally would like to have a few bottles in my cellar like that, break 'em out at parties and have a story to tell.

But here't the other thing: If I were a winery in Oregon, Washington, New York, Virginia, or maybe even France or Argentina, I would DROP my prices ever-so-slightly. No one is taking down Cali any time soon, but I do think there is some brand development opportunity available to anyone willing to make a go of it next year. "Hey Napa's expensive this year, but check out this similar quality Cab from XYZ. It's usually more expensive than Napa, but they've actually lowered their price this year, and now they're CHEAPER than the Napa label." That's the pitch. EASY!

But I really do feel for the citizens of Napa and to anyone who loves Napa wine. It's a tragedy, it really is.

I love Napa Valley wines! I wish they'd make a sequel of Sideways. What do you think a bottle of a decent Napa P.N. will cost in 2015?