American Books One Might Want to Get to Before Others 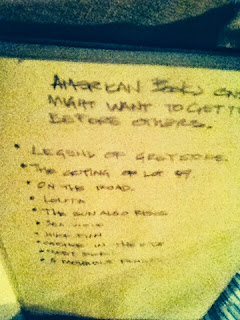 I have a new friend from England, C. C admits to being woefully underread when it comes to "American Classics."

C wanted a list of American books I thought were worth reading, so I made one. I stuck to ten novels. Here's my list:


On a personal note:

White guys I wanted to put on this list but didn't make it:

Black guys I should have put on this list:


Anyway, that's my list. The last thing is, I think Howl should be mandatory American reading. It's a book of poetry, but I didn't want to leave this post without explicitly mentioning HOWL by Alan Ginsberg. I'll have to find C. a copy somewhere.