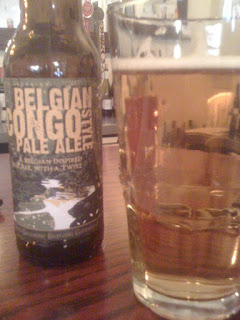 So the brew master at Devil's Backbone is a history buff and likes to have a bit of fun with his beers, and he created this delight: Belgian Congo Style Ale. Suppose the Belgians abroad had behaved like the English in their colonies. The English wanted English Ale in India, but it spoiled as ballast on ships in transit. Their cure: add more of the natural preservative hops, accidentally inventing IPA. It took a long time for anyone to really actually like India Pale Ale, but they eventually did.
Now what if the Belgians did the same thing with Belgian Ales to get them to officers in the Congo? Well, you would get something like Devil Backbone's CPA. Isn't that awesome?
I am thrilled to have it at the Darjeeling Café. It's really delicious, one if the best things DB has created. It's refreshing and complex and most of all drinkable. I could put away a few of these in one sitting easy. Plus, it's local Virginia beer, and that's good for everyone.
Posted by Sky Jack Morgan at 8:05 AM