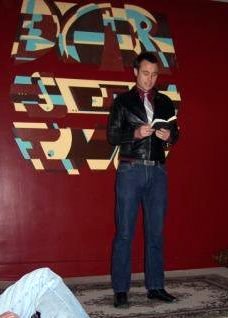 I always write something in April about National Poetry Month. I feel very conflicted about NPH, but this month has been a sort of return to poetry for me.

Sure, I still read and write poetry. I even publish from time to time. But since I've been in a band, writing songs and playing music and doing all the things you have to do to keep a band going has been taking precedence over all other modes of artistic expression and ambition.

This April, we had two poetry readings at the Darjeeling Cafe. I read at one of them. I read a short cycle that has been accepted for publication, and I read another short portion of a poetry book I've been working on. I'm pleased to report that poetry readings, no matter where you go, are the same as they ever were.

People still clap when they're not supposed to. There are still members of the audience that will say "hmm" rather loudly in order to tell others audience members that, yes, they are listening to poems that are affecting them on a level that pushes them to audible response. There are still those well-meaning poetry reading goers who will laugh mercifully at little jokes in poems. Kids still make noises and distract everyone in a charming way that only kids can. I've always loved it when people make noise at poetry readings (except for the hmm's), but there is still the one lady who will "shh" her fellow inhabitants of the temporary holy ground of poetry. There's still the poet who demands people participate by raising their hands or saying something when prompted. There's still wine and wine and wine and wine and purple tongues to prove it. There are poets who read too long and ones who are too nervous. There are poets who don't know what a poem is but have enough money to publish through vanity presses. There are still stacks of books that go unread attractively arranged on a table near the bar where you can buy them for a handsome fee, knowing you'll never read them because there are just too many poems in them, and they aren't organized in a way that makes you want to finish. The pretty people and the ugly people and the over-educated and the wannabes are all still there and make a hodgepodge of who's who that makes you realize everybody's a nobody in the end because the art you're performing fell out of favor long ago and doesn't matter to anyone outside of that room, so you love them all anyway.

Poetry is still dead except during National Poetry Month for most people who have ever read a poem or pretend to care about things like that.
Poetry is still the greatest form of artwork the human race has ever known, forcing it to the privileged few and fringes.

Osama's death is a very strange thing. It caused many people to cry out in jubilation. I don't feel the way I am supposed to feel about it. I'm supposed to be happy, I guess. I'm supposed to be relieved. But I wonder how much information died with him, and I wonder if knowing more about him and how he became the way he was would be more valuable than his corpse. I've heard why he hates Americans, but I would like to know what made him hate Americans. I wish that that information were more public, and I wish more people would think about what makes a mass murderer. I learned almost nothing from his death, and that's why victory is often empty, and this one seems Pyrrhic if it is a victory at all.
Posted by Sky Jack Morgan at 1:05 PM

pretty good post. I lawful stumbled upon your blog and wanted to command that I get really enjoyed reading your blog posts. Any condition I’ ll be subscribing to your maintain and I hope you despatch again soon christian louboutin platforms.