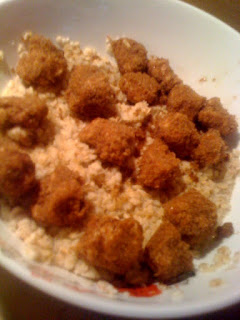 I invented these things called Squirrel Nuts. When I was on a run I
saw all the squirrels tending their various caches getting ready for
winter and I thought, "they don't put them in trees like in cartoons;
they put them in the dirt; don't they mind their nuts getting dirty?
Why stick them in the ground?" I decided they must like the taste
better after their nuts have been buried.

I took crunchy peanut butter and rolled little balls with my fingers
and a spoon.

Then I rolled the balls in brown sugar (the dirt).

Finally I covered a bowl of oatmeal with them.

Delicious! It tastes kind of like the inside of a butterfinger
candybar. Butterfingers aren't vegan, so I haven't eaten one in many
years, but that's what squirrel nuts reminded me of. Yum!

Fun fact: there is no cholesterol in peanut butter. Some people think
there is, but there isn't. There's no such thing as a vegan food item
with cholesterol, meaning I have not knowingly or purposely consumed
ANY cholesterol for many years. Awesome, right?! Cholesterol kills
more people than cigarettes.