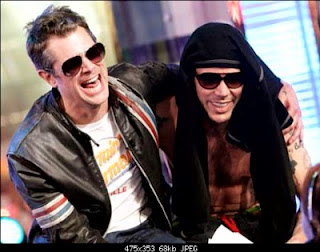 We saw Jack Ass 3D this weekend. It was delightful in a way that all
the Jack Ass movies and tv episodes and spin-offs are. And, as the
title clues you in for, it's in 3D, which shows you really how far the
Jack Ass empire has come. Oh how the crew has grown up with the likes
of me, hooked at the age of fourteen, the first year my family had MTV
and the first year I heard of Johnny Knoxville and saw his awesome
jacket.

I always thought "what a cool jacket." It looked oddly familiar and I
wanted one. Until this weekend, when in the last scene in what
certainly must be his last Jack Ass movie he wore his famous jacket. I
was like, "Dude! That's the jacket from Easy Rider!"

There is something unique in that jacket.

I love it. I wish they had a vegan version.