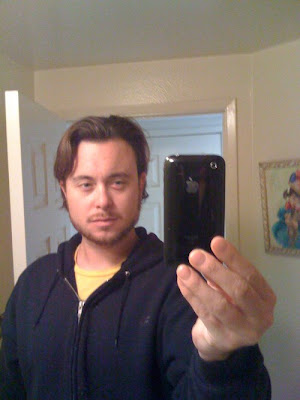 Whew!
As election night rounded 8PM PST, I cheered because Virginia went Blue. The race was called shortly thereafter.
McCain supporters booed and shouted things that were probably offensive, but I couldn't understand them. Palin looked teary-eyed, but still soulless.

Then Barack Obama accepted. Goosebumps raised on my skin. I don't always realize when I am witnessing something that history will remember. It's hard to tell right away when the world changes. This time I saw it fairly quickly, and that's a great feeling.

I took a picture of myself the next day. I had a stye in my eye, and I thought it looked gross. 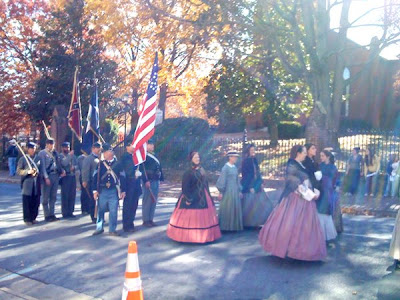 I've only been here one full day. So far everyone's really nice to me.
My girlfriend owns a teashop called Darjeeling Cafe, and I can sit here and work and look at the ancient cemetery across the street and listen to the occasional bells from the churches. The Darjeeling Cafe is on West Beverly St., which is the main thoroughfare in Staunton.
Today there was a veterans' parade on West Beverly. Vehicles and people dressed in all sorts of military gear from different eras. Boyscouts and Girlscouts and Cubscouts and Brownies all marched in the parade, too.

There were bands and things like that. Patriotic songs.

There was also a veterans' MC. 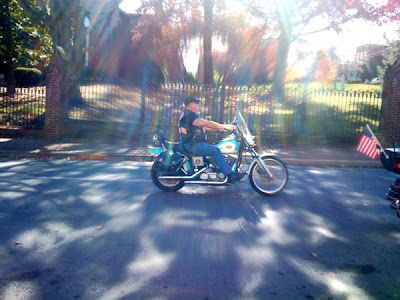 i'm so tired of you jack morgan

dude so im not friends with you or this community prevention service announcement but old friend to ex friend, cut your hair. remember when people bought the white iphones. i added up that my two previous ones probably cost as much as a white one.