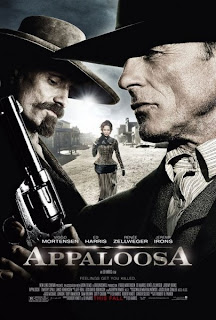 "Appaloosa" is a great western. It's super rare for a genre movie like this to be very good. I, for example, hated "3:10 to Yuma." "Appaloosa" is filled with compelling characters in a setting as stunning and gritty as we expect to find in such a film. The characters, though, are the main thing here. The film doesn't rely on huge shoot outs or sweeping shots of the Arizona wilderness. There is one slip where the film forgets to trust the intelligence of its audience when Rene Zellweger actually confesses to the camera that she is afraid to be alone or be with the wrong man, telling us her character's motivation as if we weren't smart enough to figure it out on our own. But I would see this one again. I almost never say that. It's realistic but somehow doesn't lose the romanticism normally ascribed to the wild west. 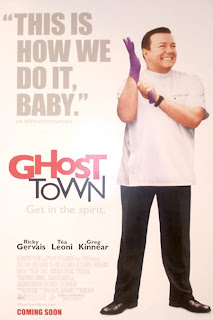 "Ghost Town" is about a guy who can see ghosts. You'd think that would be boring, since we've seen a million movies with that gimmick, but this movie's funny and kind of touching. It's fresh and interesting and clever. 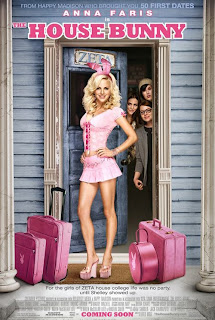 "House Bunny" is about a woman who lives at the Playboy Mansion until she's kicked out and homeless. She goes to live with a sorority. It's kind of like "Revenge of the Nerds" with boobs. I think what's great about this flick is that it relies on good jokes instead of cheap tricks. I mean it's still kind of a "dumb" movie, but it doesn't act like it. It asks you to meet it halfway and doesn't take advantage of you. It's not like "Nutty Professor," where you go along with the absurdity of a big, fat Eddie Murphy just to get a fart in the face. And it manages to be funny without being mean or crude, surprisingly.
Posted by Sky Jack Morgan at 12:59 PM