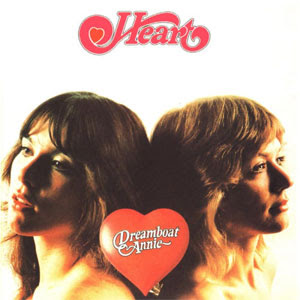 The funniest thing that has happened so far in this election!
The band, Heart, writes a scathing letter to John McCain about his using their song, Barracuda, whenever whatsername, that hocky pitbull lipstic whatever running mate, takes the stage. 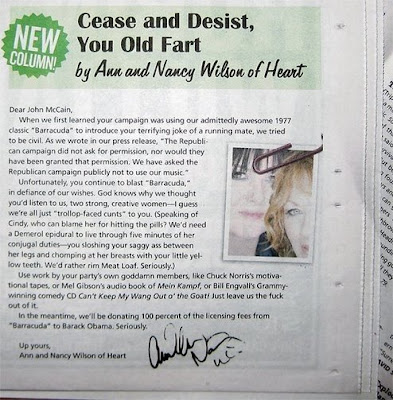 The picture is a little small, but if you squint your eyes, you can read where it says, "we would need a Demrol epidural to live through five minutes of [Cindy's] conjugal duties--you sloshing your saggy ass between her legs, chomping her breasts with your little yellow teeth."

I love this kind of stone throwing. Will the Democrats finally get their party members to do some muck-raking for them? I wish more 70's musicians spoke out to their generation about how terrified they are about someone like John McCain representing them. What else are they doing? There's a huge section of the voting population who still love and feel a connection to the music of the late 70's. Those people have to get more vocal about how the Republican party has ignored and misrepresented them and played them for their patriotism and their fear; how thye've been disrespected.

The Republicans obviously don't have any respect for anyone at all. Remember when Kanye West said "George Bush does not care about black people"? Republicans don't care about anyone or anything outside money. Palin has no respect for the law or ethics. She refuses to cooperate with a state agency investigating her questionable conduct as governer, and she and her overlord just ignore the pleas of artists asking them nicely to stop using their work. Thumbing their noses at the millioins of voices crying out for their country back, begging for peace, aching for the right to see a doctor when they're sick, yearning for the access to education and upward mobility. Sure, sometimes they take a moment to pander to the worst parts of all of us, but when they've managed to trick the nation into electing them, they roll their eyes and go back to fleecing the country and turning our children into UGG Boots.

That's what I'm going to do from now on. I'm just going to walk around doing whatever the hell I want, and when people ask me to stop I will tell them no or ignore them and go about throwing army men out of the school bus window tied to a string——Gosh! A world in which everyone behaved that way would be unlivable.

I am going to write an open letter to someone soon, I think. More people should write more open letters.

I found this out here, Gawker.com.
Posted by Sky Jack Morgan at 6:57 AM