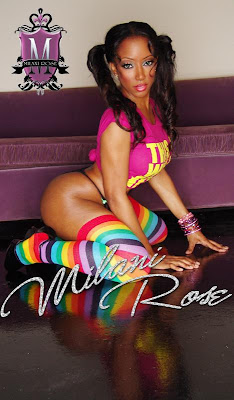 I trust Milani Rose more than I trust the average physician standing in the way of 45 million Americans and and the right to medicine if they are sick. I found out about her by googling something with "sexy" and "poetry" in the search line. Milani Rose is curvy. She wants us to vote for her because "from my poetry to my sexy pics." Her favorite color is "Rainbow." I hope that everyone who hated me for posting pictures of lingerie models who were "too skinny" or "too close to the ideal of beauty perpetrated by misogynistic piggish men" and Suze Stein will stop hating me now. Suze Stein did not make the ForGodot.com list. Neither did Milani Rose. I think that Milani Rose's poetry is better than Suze Stein's.
Posted by Sky Jack Morgan at 4:23 AM