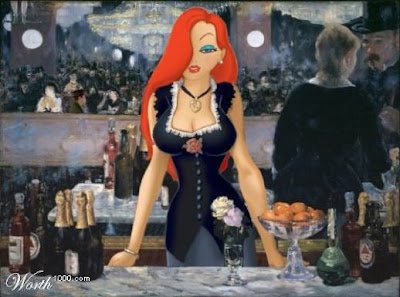 Normally when I post something for Agent G4, I just put a work of classical art up and then write sooooo avantgarde, which I have always thought is funny for some reason. But I have to say that now, after two random searches, this is the second time Jessica Rabbit has made it onto my blog, and I think that is a little weird.

Jessica Rabbit has only appeared in three short cartoons following the hugely successful "Who Framed Roger Rabbit" movie, but she is an icon. The internet is filled with fanboys who love her. And I don't think it's because they get off on gawking at big-boobed toons, though with the weirdly popular hentai phenomenon there must be a few. And I think that she has just one catch phrase, which does not an icon make. My theory is that Jessica Rabbit is a pie in the face of the establishment that Disney wears as its own. It shows what will happen when you give artists and writers a long enough leashe.

Jessica is unique among cartoon women and almost never included when the princesses come out dancing on lunch boxes and rucksacks. She's the woman we want to keep away from our little girls because behind all the glam and absurd proportions, she's the realest one. She's kind of a thorn in the side of studios because they would love to create another icon without letting an artist do it. Artists can undoubtedly create icons, but let's face it, who in the mainstream admitedly wants another Mrs. Rabbit? The truth is that people have no idea what they really want and they would never predict that they would love the characters they do.

Another one of these is this guy. 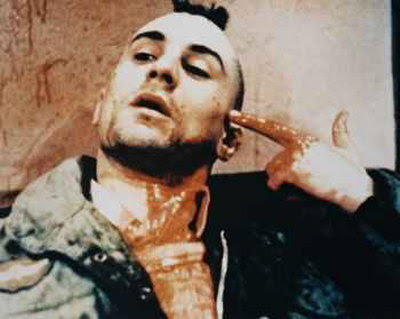 In the early 70's, movie studios were freaking out. No one wanted to see their crap Frankie and Annette wannabe movies or another Dr. Doolittle. They made lots of crap back then, just as they are now. So they let their most promising directors, the ones who had done things they didn't understand but audiences liked for some reason despite all of their focus groups and test marketing.

The 70's gave us movies like "Easy Rider," "Taxi Driver," and "God Father I & II." Young directors who still saw their craft as an art and were still self-conscious and unsure of their talent but had something. . . SOMETHING! That something made them no good at garbage like "Earthquake" or any of the crap the studios actually wanted to be successful.

They were the 1% of film makers. The ones who created and became icons for better or worse.

Today the film industry is facing another lull. They want us to watch crap. They want to make it more spectacular with 3D effects and CGI characters and digital miracles. But at this point, a lot of that stuff is rather underwhelming. Rather than pay a writer to do what he's good at, they want to blow the dust off a crowd pleaser of days gone by á la "Herbie the Love Bug." This will not work. And people will grow more and more bored of the standard video gaming stories. too. Some day studios will realize that effects and stars, although useful, are nothing compared to writers.

The only place they seem to understand this is a few select cable television stations. Who would think that the Sci-fi channel would be successful selling well-written shows whose effects are secondary? Who thought HBO was going to be a power house of smart entertainment? What the hell is going on over at Showtime? And FX? These stations provide several examples of how writers end up giving people what they want even if they don't know it. Damn your focus groups.

I like going to movies, and I look forward to the day when studios are so broke they have no choice but to try something totally new, totally old, to tell a story we want to hear. I am sick of stories about "good" and "bad." Can't we just trust an audience will enjoy time with interesting characters without pandering to some bull shit sense of what we think they want?

Think Hamlet or Macbeth or any of Shakespeare's leads. They are never so easy to understand. They're icons. Think of any of the things people really love; they seem complicated because they're realistic. Even Jessica Rabbit, a lounge singer who seems like a philandering temptress, is something much more than all of that. DeNiro in "Taxi Dirver" is just a guy who wants to impress a girl because he's crazy, but there's a lot more, no? Or how about Bloom in "Ulysses"?

When was the last time you met a character in a movie that you found interesting regardless of his political leanings or motivations?

Email ThisBlogThis!Share to TwitterShare to FacebookShare to Pinterest
Labels: agent g4, movies, the way things ought to be.