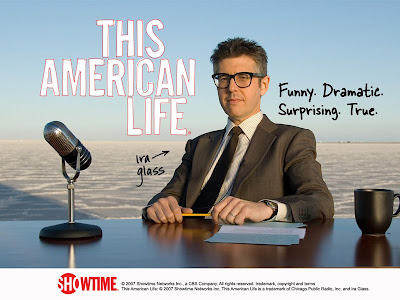 I've been watching This American Life on Showtime. I watch a lot of TV when I visit my parents. They go to bed early, so I catch up on the good shows on Showtime On Demand. My favorite is "This American Life." You've probably heard the show on NPR, but if you haven't you should start Podcasting it. It's pretty magnificent. I feel like I am getting sentimental when I watch it, like I am losing control of my tear ducts and other points of weakness. Just that good? Maybe. When I'm home, I never watch TV; there's too much going on, and it feels like a waste of time. I like good television, but I think most of it's worthless. Ira Glass is not worthless.
I used to think about what I would do if another war like Vietnam came along. Now I have friends coming back from the war in Iraq, and I wonder what I am doing. I am against the war and always have been I think, but what am I doing about it? I always feel like I am missing something. I always feel like there is something more I could be doing.
Yesterday I yelled at an old friend for making a racist remark about Mexicans. Nothing pisses me off more than racism. That old friend was a Marine in Afghanistan and Iraq, and he often says things out of ignorance. Sometimes he says things I don't snap at right away. I don't want to always be that guy who points out the shortcomings of others. I try not to say things about eating meat, and I try not to bring up politics with Republicans; I try to dodge. I am going to stop dodging. Even though I rarely roll over, I feel like I roll over too much. I am going to be more active from here on out.
Base all ethical positions on logical deliberation and report.
I joke a lot about violence because it tends not to scare me. I am a big person who grew up with violence. I know it's wrong. I probably won't stop joking about it, though.
All I do is talk. Sometimes I think that I am making headway. Other times I think that I'm not doing enough. No matter how much I talk, no matter how many times I vote, I feel voiceless.
Posted by Sky Jack Morgan at 2:22 PM