I don't hate my eyeball. I don't think I ever have. I have always enjoyed my eyeball. Lately, every morning I wake up and in my left eyeball, I see lots of black spots in the morning light. A few minutes later, most of the black spots seem to go away, but one always stays right in the middle. I think there are more spots when I wake up now than there were a few days ago. It looks like a dirty movie projector or scratches on a microscope. I only worried about it passingly until today. Today I woke up and my left eye had black spots all over it. They went away pretty quickly and now I only see the really small one right in the middle when I look at white things like the ceiling.

I thought, "maybe I will have to get a glass eye. Maybe they will take my eyeball out and put a patch on it, and I will look like a pirate, and everyone will think it's sexy and cool until I take the eye patch off and they see how gross my eye socket looks without an eyeball in it."

I don't mind the passing of my twenties. I have lived fast and loose, and I don't see any signs of slowing down or anything. I would like to slow down, but that doesn't seem to be the person I am. It's weird to look back on some of your life and see that you aren't the person who you've become but the person you always were and never noticed. Like you don't become a person but become aware of the person who always was, the person lurking behind the meanderings of youth, those twists that we think are making us, like a doleful lion or a curious squirrel, waiting for the perfect moment to slowly emerge from the bushes into the light. But I will miss my eyeball.

I am afraid of eyeball surgery. The pain that must result from someone slicing your cornea doesn't register, but the whole idea of a knife tearing my windows ope is just too much for me to think about, so I won't consider going to an ophthalmologist until it's so bad that they only have one choice: take it out. I will miss you, old blue. You've seen so much, and I will witness only half as much after you're gone. Please don't think I hate you. It will happen quickly; you won't even notice you're gone.

Last night, before we went to the burlesque show at the Uptown, which was particularly hilarious last night, I do say, I met a woman I have known for a short while and had to look at her differently for a moment. We haven't really spoken all that much because she is always surrounded by men who vie for her attentions. But she came to me while I was alone, and we spoke a few words, and I thought, "now I get it." Her eyes shone in the dim lights like lamps in dark jewelry shops or the shivering points of nighttime cities in the rain. 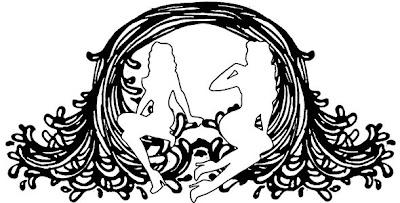