Joining the Army so We don't Have Riots: Remembering the L.A. Riots 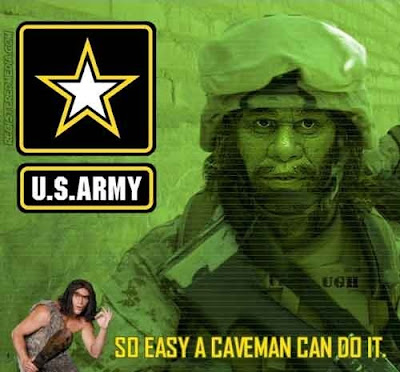 Are you a caveman? You should become a mercenary. You can be a soldier for hire. The Army says that friendly-fire is at an all-time low! Now's the time to join!

I am withdrawing my support from the troops. I am sorry troops. We have been at war for a long time. If you joined up while we were at war, you were not hood-winked. You wanted to go to Iraq. If you wanted to go to Iraq, I do not support you. I don't want to pay taxes anymore. I don't even want to file. I don't want to buy anything that will support you in any way. I don't like you. If you think that this war was/is a good idea, I do not like you and do not support you.

Unfortunately, there are no jobs for you if you come home. Your job is secure where you are. All the jobs you had when you were in America are gone. No one has any jobs. Everyone is getting laid off. Some of the people who are getting laid off are joining the Army. People in America are losing their houses. Not the way people lose their houses in Iraq, but still. It's dire. The more people lose their houses and their jobs, the more people join the Army.

I am afraid that if it continues going this way, people will start breaking into my house looking for food. I live on the first floor. I lived through a riot once, and it is extremely frightening. When a city catches fire and everyone's running around with guns. . . man. The National Guard comes in after dark and shoots people. If you are out after dark, you get shot. That's how they cure riots.

Maybe I should do some work convincing poor people to join up so that I won't get robbed when times get really rough. Times are getting really rough. If we send more people to Iraq, no one will notice how rough the times are. All the poor people won't be around to complain about being poor. I'm pretty poor, but I am feeling kind of rich lately compared to some other people. There are three houses for sale on my block. It's scary. Food is getting more expensive. I don't buy gas, but it is very expensive.

SO JOIN NOW!!! FRIENDLY-FIRE IS AT AN ALL-TIME LOW FOR A LIMITED TIME ONLY!!!
There's Strong. And then there's Army Strong.
-----------------
Seriously though, when you have a large group of young men who are unemployed and frustrated, you have riots. I just spent an hour looking for a youtube video of the LA riots, whose anniversary is today, April 29. None of the videos show what really happened. I was thirteen. They closed all the schools. Every channel on TV was of beatings in the streets. Everyone was blaming everyone else, and that's still happening so many years later. Everyone's got someone else to blame. No one ever mentions that unemployment was at 7.5% and was only a year after the Persian Gulf Crisis. What do you think is going to happen when gas is five dollars, milk costs the same, all the soldiers coming home can't find jobs, and their parents can't help because they just got laid off? Today, even though Youtube fails to have any decent videos, I remember what happened in L.A. when I was thirteen. I never want to see that again, but I am afraid it will soon.
Posted by Sky Jack Morgan at 10:47 PM

I just got this from Megan Graves. She wants me to advertise for the military.

Would you please consider adding a link to my website called Job-Applications.com? Our armed forces jobs section provides online applications for military jobs for each branch of military. Its a great way for people to find military work quickly, and its constantly growing.

If you think it would be of use to your visitors, would you please consider adding a link to my website on your page here:

Please let me know if you have any questions.