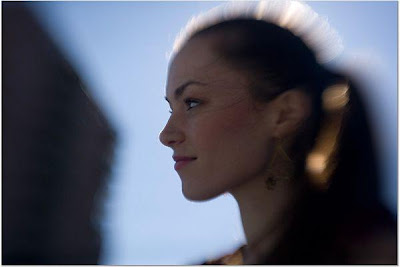 Firstly, I am staying at an apartment that is quite luxury.  The shower actually is big enough for me to stand inside, and the head is high enough for me to get my hair wet without sitting down.
I went into a bar that might have actually been in Greenpoint and not Williamsburg, but who cares, right?  It was called Soft Spot Bar, and I was writing a poem about it because I thought it would be a good idea to write a poem about every bar I went into last night.  I didn't write one for the first bar, which was a great little dive with an extremely nice bartender who gave me a high five and wore many interesting tattoos.  Writing a poem about a bar is a little lame maybe, but there I was doing it when a woman walked in and sat next to me.  I wouldn't have noticed her but she took out a small spiral book and started writing what appeared to be poetry.  I looked at her face and realized that she was one of those seldom true beauties in life.
And I never talk to women at bars, and as a rule I don't talk to people who are writing, but I said to her, "you're not writing poetry, are you?"
It turns out that she is a singer-songwriter.  She asked me if I review music, and I told her I tell people what I like through my blog.  So she gave me her CD, to which I am now listening.  I will review it soon.  Jeannine Hebb and I had a nice conversation, but she had to go to a show that I wish I had followed her to, but instead I went to another bar and ate and walked around.  I met a Mexican guy and we spoke Spanish.  My Spanish is rusty, but it works late at night quite well.
I am kind of a sucker for women who can play piano and sing.  Especially when they are charming.
She has a myspace.  If you want to check her out.
Posted by Sky Jack Morgan at 8:35 AM