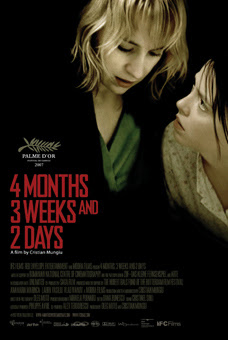 Person A asks person B for X. If B gives X to A, B will go to jail for 10 years, maybe even life. Person A offers B money. B doesn’t want money. B wants sex. They have sex. B gives X to A. Fair? As long as X is not essential to A’s life, I think so. No injustice has been committed.

The genders in this scenario are kept neutral because they shouldn’t matter. It happens in Hollywood and corporate America every day, and the genders are interchangeable. People trade sex for all sorts of things.

For example, wannabe star wants a part. Producer and Wannabe decide the part will be given in exchange for sex. Or middle manager seeks promotion. Middle manager trades sex for promotion.

It’s all very gross, but it isn’t called the oldest profession for nothing. An argument can be made regarding the effect of prostitution on communities, but at its core, prostitution is a personal choice and not injust or unethical.

In 4 Months, 3 Weeks, and 2 Days, a pregnant student seeks an abortion in communist Romania where they are illegal. If the technician is caught, he will serve ten years in prison. If the pregnancy is terminated after five months, he’ll be tried for murder. We don’t know under which circumstances she conceived, but we have no reason to believe it’s the result of rape or incest or a life-and-death situation. What’s clear is that the pregnant student and her friend want to finish school so that they won’t be sent to the countryside to work.

The students have options, but they find the cheapest person who will perform the abortion. But he’s cheapest because he doesn’t want any money at all. The only thing he’ll risk his freedom for is sex with two college students. The girls are faced with a new decsion, and I won’t tell you how they decide, but the writer has produced a perfect fork; no matter which way the story goes, it will be interesting. The writer has taken something fairly common in film and intensified it by loading the variables with emotionally charged and politically sensitive topics.

What’s remarkable is the American audience’s reaction. While I was thinking about the Marxist idea that prostitution would be non-existent in communism and how an oppressive Marxist government in this case was turning people into prostitutes, while I was comparing the story to Of Mice and Men, the rest of the audience was blaming the abortion technician, which I think is odd. Should he have done the job for free? Why should he accept the money if he doesn’t want it? Does anyone expect a criminal to risk his freedom out of the goodness of his heart? The situtation is quite disgusting, but the film is merely depicting the desperate measures people will take to obtain what a ridiculous law prohibits.

I wish I could talk with a Romanian about their reactions to 4 Months; Americans always seem ill-equipped to talk about why they feel certain ways or why things are happening the way they are. They get all riled up when things happen that offend them, but they never take it a step further. They just get really upset and angry.

i wish i could talk to a romanian about you

We don’t know under which circumstances she conceived,

Probably under the circumstances that contraception, as far as I understand, was illegal in Romania during the time period the film depicts. That whole Nicolea Ceauceauscu thing and Romanian orphans and all that. I think this is a huge detail you're leaving out of your argument. Under Ceauceauscu, sex itself is potentially lethal unless its progenitive.

Nothing is lethal here.

That part of the scenario doesn't matter; it still only complicates the politics, not the ethics, which are two very different things. A Californian is reminded of that difference every time a national vote of any kind comes around.

Even if she was raped by her father, the technician in the story is not bound to the college student in any way. He remains a merchant who can name his price for the goods/services he sells. As a patron of his, you can decide to pay him or go someplace else, or, in this case, drop out of school and have the baby.

None of her options are good ones, but when you're in a jam, your options seldom are. You can vilify the abortionist if you want to, but he is just another person trying to get what he wants, like her, really. The rest is a question of politics and what happens when insolent governments decide what we can do to our own bodies. The rest is where the a discussion can happen. But Americans need villains. They don't care how horrible things happen, they just need a person to blame or a country to bomb.

You seem to be saying that the American audience is vilifying the abortionist as an autonomous agent whereas you think we should be viewing his actions within a wider sociopolitical scope. I would be curious how you would then justify your own position from your original post that prostitution is a 'personal' choice. I don't think one has to focus just on child prostitutes in Thailand to engage with the idea that wider forces than mere 'choice' might be a factor. At the very least, a number of circumstances probably ensure that many of us remain a lot farther away from ever having to make that choice than others.

Child prostitution is a different case for several reasons. One reason is that children are usually not equipped with the capacity to make their own decisions. Another reason is that they are usually coerced by parents or other adults to partake in prostitution. Why do you keep trying to change topic? You are clouding the issue at hand with incendiary, non-related ones.

You can claim that the abortionist or the drug dealer are disgusting, that they offend your sensitive notions of piety, which are nothing less than self righteous judgments akin to those of Christian whim, but you cannot say with any degree of validity that they are villains or rapists. They haven't forced anyone to do anything.

By declaring one component of an offensive situation a villain, you stop thinking about what is actually occurring. When the World Trade Center went down, it was easy to find a villain because murder is so clearly wrong, but Americans were so quick to dump the whole thing on Bin Laden. No one thought about, indeed, no one thinks about the reasons behind the attack because we blame it all on him.

But in the abortion situation, no one is killed, coerced, or even stolen from. A barter agreement is met, and still, American audiences will point their fingers at one party and label that party "villain" and be done with it.

...as you point to the american audience and cry "villain"

When I wrote that, I was specifically trying to shift focus away from that hot topic. I am not sure why you chose to interpret that statement in the way that you did.

As far as getting off topic is concerned, I'm still not seeing any real discussion on your part that explains how an institution such as prostitution can be boiled down to mere 'choice' without some examinations of circumstance and the fact that some people, for reasons out of their control, come closer to having to choose in the first place.

as long as there are options, one has choice. If you have other ways of getting what you want, and you decide to trade sex for something, that was choice. i find it interesting that people often think that if everyone had enough money to get whatever they want, prostitution would disappear. People want to blame men for female prostitution. But unless we're talking about slavery, there's choice.

I am not calling American audiences villain, TBA. I am not saying they are malicious or evil or any of the things they would have to be in order to be villains. I am only saying that the American desire for a villain hurts them.

options: what a wonderful choice to choose!

how to trade your delusions away