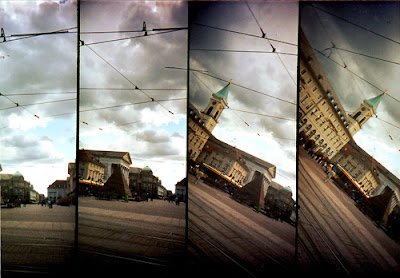 Everyone is saying that The Wire is the best writing on television. I agree with everyone. I finally caved and started watching the show on DVD, and it is quite brilliant, I must say. I am already on season 3.

The dialogue is so spontaneous and realistic that I cannot believe a person actually wrote it.

The camera work makes me want to go to Baltimore just to see it with my own eyes.

The wire also makes me want to change the way I speak. Poetic verse makes one want to change the way one speaks. Who hasn't wanted to speak like Henry V? And I am not talking about the slang. Anyone with a slang dictionary and a Busta Rhymes album can figure out how to talk like an East Coast urban urchin, but the rhythm and speed with which the people speak on The Wire is very interesting to me.
·‚·‚·‚·‚·‚·‚·‚·‚·‚·‚·‚·‚·‚·‚·‚·‚·‚·‚·
The picture above is not of Baltimore; it's Karlsruhe. I used to live there. It's taken with a Lomo I bought in Vienna. There is a pyramid in the middle of the city wherein its founder is entombed. Washington DC borrows its layout from this circular town. I used to sit by the fountains--there are numberless fountains--late at night and write. It was hard to find other poets there.
Posted by Sky Jack Morgan at 10:44 AM