Poets and Artists this Wicked Week

Indeed, a great week for readings and events.

Baraka is a performer. I wish that I could do what he does. I often try to keep politics out of my poetry, but he can't keep it out. It works for him, and he can sing and keep a beat on a podium

D.A. Powell: Why didn't anyone ever tell me how cool D.A. Powell is? I don't think I would get away with writing an ode to a crab louse, but he does. His poems were good, and he was a good reader, too.

Joshua Clover: Everyone already knows that I think Joshua Clover is one of the coolest poets out there. His new work is self-consciously intelligent and informed without sacrificing humor. Clover somehow inhabits that tiny space between pompousness and self-loathing. Some people think his poetry is elitist, but come on. 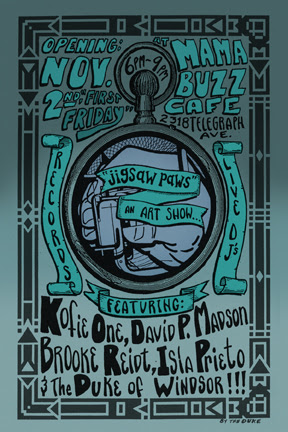 Last night was Art Murmur in Oakland.
Everyone's favorite little bookseller, Isla Prieto, was displaying her artistic prowess at Mama Buzz Cafe with Kofie One, David P. Madson, Brooke Reidt, and the Duke of Windsor at a show called Jigsaw paws. It was a cool little show and one of two highlights.

The second highlight was a new place called Oakopolis. There was a show there that was all crafty and fibery and I liked the space so much I was green with envy, and I wish I could have a place like that to hang out and make art in.
I met one of the people who run it, Cory Gunter-Brown, and she was a really nice and happy person who showed us the stuff that she made and let us write on her typewriter. I think that place has a lot of promise, and it will be a permanent stop on our Art Murmur excursions from now on.

And happy Hallowe'en, All Saint's, and Day of the Dead.
Posted by Unknown at 10:17 PM