NIGHT AND ME AND LEATHER TROUSERS AND DROPSY

The nighttime kind of kills me. Last night, I tried to sleep. I was tired. I tried to go to bed at nine. I had to keep turning the light on to write things down. It didn't matter how exhausted I was. I wanted to sleep for 8 hours like normal people. The last time I looked at the clock it
was twelve. I woke up at 4:30. That gave me one half hour more than I usually get.

It isn't cute to never sleep. Nightmares are almost always without value.
Yesterday, Gamboa was surprised by my lack of sleep. I told him I don't mind burning twice as brightly. It's quips like that that make people hate me, I think. It's things like that that reduce local impresarios to sycophantic name-calling like she who called me a masculinist without looking the word up on urban dictionary or something.
Perhaps it is that that keeps me up at night, people who who hate me. It's weird to think that there are people you have never met who hate, who say nasty things about you. 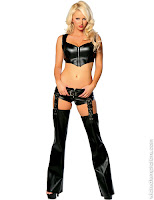 I've seen her in her leather trousers at readings thinking she's better than other people.

I don't think I'm better than she is. I am as worthless as every other poet. Nearly talentless, I continue to write and draw and complain about things I cannot change and think about things I cannot elucidate. But I won't call her names without meeting her. And I will never wear leather trousers.
™™™™™™™™™™™™™™™™™™™™™™™
Someone I respect asked me why there hasn't been a new Dropsy poem in a while.
Posted by Sky Jack Morgan at 7:52 AM

why do people hate you? we at venom literati don't get it. we also think you should wear leather trousers always. they would help you to sleep better. they would also help you watch television.

My friend, Didion, told me it's because I take up a lot of space.

I think leather jackets are cool. But leather trousers just say you're trying too hard. Needless to say I have a leather jacket. But that's just me saying nice things about myself again.