Actually, after all of my fears regarding this one, it's my favorite and I'm glad it didn't suck.
Lots of violence and suspense, plenty of sexiness, and a healthy dose of fanboy stuff, this final film of Nolan's Batman story is pretty great.
I loved that the film didn't try to be more than a hero epic, and I love that its makers were talented enough and thoughtful enough to make it unique. The similarity batman has to his enemies and the similarities his enemies have to Batman's friends provide some thought-provoking fodder for anyone who feels like looking deeper, but the movie doesn't ask you to. That's a great little trick for an action movie to accomplish, allowing its audience to decide how many levels to enjoy it on.
Maybe my favorite thread of it was the way the military was portrayed. And here, I mean militarism more than our armed servicemen. We start with a CIA operative who is as ruthless and cowardly as the villain, and the villain is promptly boosted from custody by a sort of Navy Seal team that is as loyal to their cause as the special forces supposedly are to theirs. I hated the military badassedness of Batman in the previous films with a Hummer AV as the Batmobile and jelly grenades and that part when he's sucked out a window by an airplane. In this movie, Bane has all those tricks and more. He even drives the same car and has an army of cop-like thugs whom he somehow manages to organize. Batman did this with cops in previous films with a military grade spotlight and tech support.
There's even a scene where a football player is depicted like war hero running from a bomb crater. And later, cops literally condemn a school bus of orphans and the whole city to death. The fact that both Bane and Batman are former League of Shadows movers who use Hi-tech military style devices to deal with their pain is also kind of fun.
If you liked the comics Knight Fall, in which Bane breaks Batman's back or if you liked the Thalia Al'Gul storyline and were wondering why the Lazarus Pit isn't ever mentioned in the first film, you might like this interpretation of the Batman Mythology. I did. 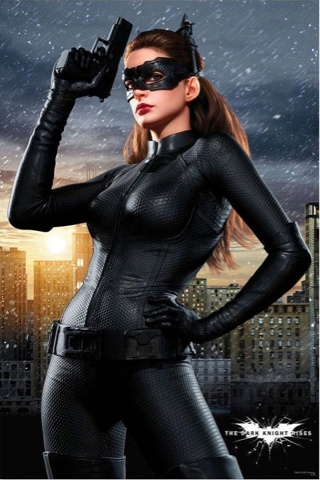