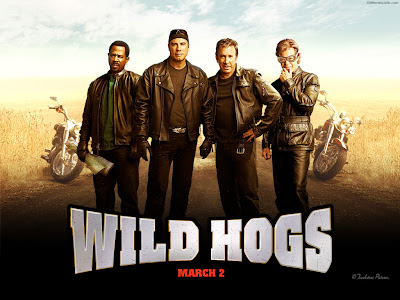 I have been into motorcycle movies lately. They're hard to find, the ones I want to see, so I decided to give Disney's latest disaster a try. Wild Hogs is tragic because it could have been really good. It seems like the writer, Brad Copeland (Arrested Development and My Name is Earl) wanted to make it a realistic tale about the frustration men feel when they are trapped by the people they love and the inherent humor and self-conscious doubt that comes along with "mid-life." There are touching moments and hilarious ones throughout. And the movie wants to be corny, which is OK, but something else happens in this flick that ruins it and pisses me off.

I just can't believe that Brad Copeland wrote all the gay jokes into "Wild Hogs." I cannot fathom that someone whose mind is so comically ingenious would sink to pander to the lowest of possible audience. The gay jokes are homophobic and disgusting and ubiquitous. What are they doing in this movie? My problem' s not that they are off color or not PC, but that they aren't funny. There is a gay highway patrol man who chases them because he wants to do them or something, and the heroes run away as if they're afraid he is going to give them cooties. Is prison not scary enough? A lawman in a uniform represents "the man," not man-on-man action, in a motorcycle comedy. Such gags turn the movie to such shit that you almost don't notice Ray Liota giving the performance of his life as the head of the bad ass motorcycle gang. It also leaves no time to explore the characters. And it would be nice to get to know these characters a little better.

Tim Allen is a dentist, John Travolta is a rich guy, Martin Lawrence is a plumber, and William H. Macy is a techie. Each profession comes with a degree of crap they have to deal with, and they're breaking under it. Just the fact that these characters know each other through a motorcycle club (99%) is funny and presents numerous comic possibilities. And I actually liked Tim Allen in this, whom I usually hate. And I was happy to see John Travolta playing a rich guy going broke, a situation he was just about in when Trantino saved his career. There is just so much potential here. And Disney screwed the pooch on it; I'm sure they had some kind of focus group to figure out what "Nascar dads and hockey moms" thought would be funny. . . homophobia! I wish Brad Copeland had just made a low-budget mtorcycle comedy with his friends in the industry.
Why wasn't David Cross in this flick? He's too smart.
Is it too soon to do a remake?
Posted by Sky Jack Morgan at 11:06 AM

hearing "Ray Liotta" and "performance of his life" in the same sentence was not something I ever expected. Brilliant.

"Why isn't David Cross in this flick?"

I ask that question of every movie I watch.