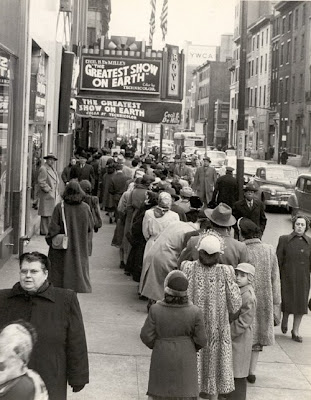 Never complain about the line you're waiting in. You just piss everyone in line off, including yourself. Bitch about it later. Try to be Zen about it when you're in line. Or just get out of line and have a beer or something and come back later.

Most lines aren't worth waiting in. I have missed out on many concerts and ice cream cones because I just don't want to wait in long lines. I didn't get to see Al Gore when he was in town because I didn't want to wait in line for him when he was just going to do the same thing he did in his movie. It really better be the greatest show on earth if you want me to stand in line listening to people whine about how long the line is. When I stand in line because there is no other choice, like at the bank or post office, I try to zone everything and everyone out. The music they play to torture you, the loud lady talking about what she had for lunch and her family members and what her family members ate for lunch are all trying to get you to give up. Don't give up! But don't complain either.
Posted by Sky Jack Morgan at 1:26 PM

Email ThisBlogThis!Share to TwitterShare to FacebookShare to Pinterest
Labels: Never

Waiting sure got easier when I got an iPod. Mostly it's waiting for buses that drives me nuts. If I know I'm going to be waiting a long time -- like at Kaiser, waiting to take a blood test or something, then I bring a book. &/or a notebook to write in.

But my take on complaining isn't to tell people not to complain. I say, Complain Entertainingly!

hmm, complaining entertainingly is making light of your situation, which is always advised, but it's not real complaining, you know?

I don't really mind waiting, but I despise lines,,,, mostly because of the other people in them with me.

Yeah, maybe, but the quip helps cut off the people complaining about complaining.