Hummers are for Men whose Penises are so Small, They Can't Get a Real Hummer 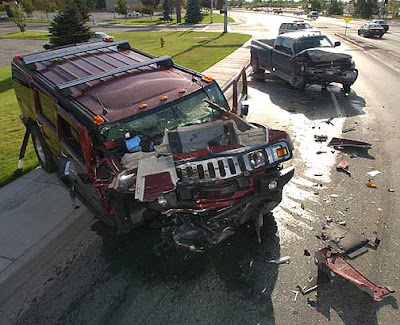 About ten years ago, I became one of the unfortunate people who has had someone die in their arms. He was a boy of about thirteen years of age who had been skateboarding across the street in Ontario, California. A large white vehicle, like a bronco or a Cherokee, had run over him. It was a very intense moment and an intense memory that I visit much too often. After it happened, I had nightmare-driven insomnia, and many things changed for me around that time.

Back then there weren't a million S.U.V.'s crowding our streets. There were a few, and I don't know and don't care why they have become so popular today, but things were undoubtedly better back then.

S.U.V.'s are fun to drive. Gun-clapping* is fun, too. Both driving S.U.V.'s and gun-clapping are fun, and both are dangerous to everyone who is doing neither.

Car drivers can't see anything because S.U.V's upper half is so high that no one can see through the windows. If you are hit by an S.U.V., you die. If you are in a car and an S.U.V. hits you, you will probably die. Bullets are like that.

There weren't so many cell phones back then either, and I don't want to rant about cell phones at the moment, but they make S.U.V.'s particularly dangerous. A little accident when a car driver is momentarily distracted by his/her cellphone is usually less lethal than a similarly-sized accident with an S.U.V.

In California, and I am guessing most places, the higher your car is, the lower you must aim your headlights. But police don't think it's worth their time giving out ten-dollar fix-it tickets out to people who endanger other drivers; let's face it, the police are only there to generate revenue, not to protect or serve or to do anything else their snappy little slogans say on their car doors. You know when you're blinded by the headlights of an S.U.V.? There's a law against that usually, but no one is going to anything about it.

I had a friend, about twelve years ago, who was skateboarding down a hill; there were never cars going by on the street where the hill ended except this time. The car hit him so hard that he was flung into the air several feet before cracking his head on the asphalt. They had to helicopter him out of Temecula to Riverside and induce a coma. But he made it, and he's healthy now. He was hit going much faster and by a much faster vehicle than the boy who died with me, but it was a car. He wasn't run over, but hit. An S.U.V., due to its height, won't throw you over its hood; it will run you over. S.U.V.'s have so much weight to them that they're hard to stop and easily crush anything in their path, especially young men on skateboards.

I propose that all farmers and construction workers and anyone whose livelihoods depend on owning an over-sized vehicle be given a separate test that is different from the one that is given to car drivers. Also, training lessons at the same cost as those that new car drivers have to take should be mandatory. Everyone whose jobs do not depend on an S.U.V. should pay one thousand dollars for a special license and another thousand for the classes. That money will go toward the streets that are under extreme duress since S.U.V. traffic has increased. Did you know that asphalt is not meant to hold so many vehicles that are so heavy? Did you know that commutes are longer because so many of the commuting cars are bigger? After all, if you wanted to drive a tractor trailer or a bus, you need a special license. If you want to fly a plane, you need a license. If you want to ride a motorcycle, you need a special license. It's for your safety and everyone else's.

What about the poor people who can't afford the licenses? Poor people can't afford the S.U.V.'s I'm talking about. And even if they could, maybe the damage that S.U.V.'s do to our environment would be a bit more localized around the rich parts of town. Smog has a habit of lingering for a while. What a wonderful world it would be that all the rich people in Piedmont and Beverly Hills all had to endure the exhaust and eyesores and dangers of S.U.V.'s while the poor neighborhoods look like Norman Rockwell paintings?

You know how Middle Eastern terrorists make money? Not from marijuana and heroin like Bush would like you to believe. They get it from oil and natural gas. S.U.V.'s use a lot of oil. They are also the favorite thing to blow up. Who blows up cars anymore? You can't fit much explosive material in a sedan. S.U.V.'s support terrorism. If you want to support terrorism, the least you can do is pay a little extra so that our streets don't look so tattered and our air doesn't taste so bad. Instead of bombing Afghanistan after 9-11, we should have rounded up the S.U.V.'s and delivered them to Saudi Arabia with the keys in the ignitions to show them that we aren't gong to be so stupid anymore. But what did we do? While the American Army was securing, but not burning, poppy fields, the American Consumer went out and bought an S.U.V. People who know things say it was because S.U.V.'s made people feel safer.

They don't make me feel safer. I feel safer around guns. I feel safer in an airplane. I feel safer as I run past a commuter train so that I can make the ferry. I feel safer in the ghettoest part of the ghetto than around an S.U.V.
I have never seen a Middle Eastern Terrorist. I am beginning to think that they don't exist.
The only terrorists I know are S.U.V. drivers. They pose a very real and very imminent threat to your and my survival.

*Gun-clapping is what stupid people who have guns do when they have something to celebrate, they shoot them in the air as if the bullets will go to space instead of landing in some grandma's lap a mile away.
Posted by Sky Jack Morgan at 4:16 PM

I always learn something new when I come here.

Also, this is scary.

Tell a friend. If we just keep one person from buying an S.U.V., we are heroes.

Your plan for special SUV licenses is a start, I think, but as a pedestrian who has spent a lot of time recently on bus stops watching people drive by like idiots, you might even be justified in suggesting that the American system of getting a driver's license isn't rigorous enough. When I think about Germany, which has far more intense drivers training, I don't remember seeing people telephoning, reading, eating, drifting in and out of their lanes, you name it, which I see daily at the corner of Oakland Avenue and Santa Clara Avenue in Oakland. Driving is a potentially lethal business, and not enough people take that seriously. Of course, people in SUVs have placed themselves in even more dangerous surroundings and should shoulder even more responsibility, but as far as I can tell, few people do.

Some products should come with lessons. Guns and S.U.V.'s and pit bulls, to name a few. People don't understand the severity of the problems that can come from S.U.V.'s because they think it's just like a normal car, which they aren't.

I like your SUV tax, however I think it's too little. Many SUVs already come with a SUV tax, the gas guzzler tax (in CA,) and people who are buying SUVs happily pay it. Maybe double what you have down for fees and add on a required annual recertification of skills because lets face it people get lazy. Perhaps we should raise the entry to driving in general more like Germany but not quite so far as South Africa.

Don't forget starting on July 1st you may not operate your cellphone except for hands free mode in California, maybe that will help some.

I like the idea of having the recert. My goal is not to punish the drivers but to make it safer for pedestrians and people who drive normal cars.

The recertification would do the trick, methinks.

The cellphone thing is going to be like seat belts. No one got seat belt tickets until they raised the fine high enough to make it interesting for everyone. If they made that fine for cell phones up to a thousand dollars, which I think is the magical amount, then we'd see some changes.

I lived in Germany for six years, and they are aggressive drivers. They telephone and do stupid things in cars, but if they're caught, there are some serious penalties. But they also don't have any S.U.V.'s to speak of.

People have always been bad drivers, but they haven't always been driving monster machines. If every mistake weighs 10,000 pounds, things get extra dangerous.

A car is a deadly weapon. People whine all the time about reckless bicyclists and jaywalking peds. But when you're in a car you ought to remember you are the one bearing arms. Those cyclists & walkers? They're running naked through a shooting gallery. It's well everybody kept this in mind.