A Reading in San Francisco, a Picture of a Cat with a Lion Hair-do, and a Rant about Oakland 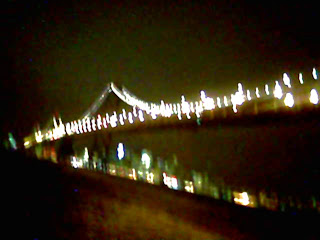 If you haven't seen San Francisco from the ferry, you should. I've been taking the ferry there lately, and let me just say that the view is worth the two dollars you're saving on the stinky BART. It also doesn't stink. Last night on my way to the poetry reading at Adobe books, I was kind of bummed that we had to get off at Pier 41 instead of the Ferry Building, but when I heard the sea lions barking, as some of them woke up and considered the ship for a moment before turning back in, barking a short greeting before falling back asleep, it reminded me of when I was a kid fishing on the ocean, and I was happy that we came that way. Plus, we got to take those old street cars San Francisco buys from other cities to run that short distance between the Pier and the Castro. I'd never been on one of those. It reminded me a little of the old street cars in Vienna, which was also nice. Nostalgia is nice. One night, three modes of public transportation. That's cool I think.

Sophie Sills read last night at Adobe Books, and I like her. Another girl named Allegra Something read, too, and she was pretty good, too. They're both MFA students somewhere. Where? Somewhere in the bay area. I think Mills. The Mills short bus drives by my house all day, filled with young women on their way to Berkeley. Juliana Spahr teaches there, and most people like her, too. William Alexander used to teach there, but he has cancer now, and I don't know how he's doing, but I hope he's doing well. Remember that play he wrote? Man I didn't like that at all, but I saw him once at Lunch Poems, and loved him. I liked Exobiology as Goddess, which is one of his books. Poets were trying to raise money for his healthcare costs, but I don't have much money, and I couldn't donate. Some day I hope that someone will raise money for me. I always wonder what kind of cancer I will get. 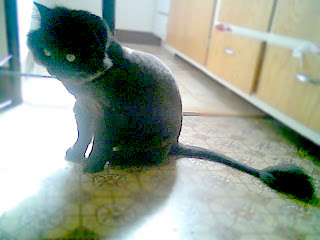 There are many things I would like to say about MFA programs but won't because I don't want everyone hating me. I have to have at least a few people still liking me, or what would I do?

Instead I will talk about Oakland for a little. Last night, we had to get back to the car we left at Jack London Square. That means getting off at 12th St., which is one of those streets people are afraid of. I didn't know which way to go, and the BART lady told me that I should take a cab. And I said, six blocks isn't far, and she said, "it isn't the distance, but the company." I appreciate her concern, but that's what everyone says about Oakland, and every time I am in the "shady" part of town, everyone is so friendly to me, I always have to comment, "This is the shady part of town? What the fuck is everyone talking about?"

Last time I checked, it ranked four in murder in America, but I know lots of people who live in Oakland who haven't been murdered. If you get murdered, it's almost always by someone you know, so just don't hang out with felonious or larcenous individuals, and you'll be fine.

Jack London Square was revamped to attract tourists, but I think it should be rethought and geared toward locals, especially the local artist and student population.

Why is the Mills short bus driving into Berkeley all the time? Are they afraid of, you know, people who live in Oakland? Spend your money in Oakland, Mills girls! Spend more time in Oakland, denizens of the bay! And for your and God's sake, take the ferry!
Posted by Sky Jack Morgan at 7:22 AM

your blog currently has 0 pictures of scantily (or non-) clad women. Who do you think you're fooling here? Do you think people won't notice?

I have been searching for good ones. I promise to rectify this oversight.

I've noticed the lack of scantily clad women too. people notice these things. also, you make san francisco sounds extremely charming and worth visiting one day.

Jack London Square is hardly the Oakland hood, but agree Oakland has a lot going for it, even in the "shady" parts.