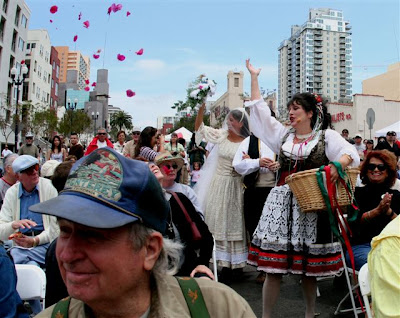 I was once engaged to a half German half Italian. We had a similar plan, which involved Vegas and Sardinia. It never happened.

Writers are the types of people who want to be happy because they believe it's possible. Everyone else is doing it. Sometimes at readings or in books, people who aren't writers who are able to love and be happy with writing partners are praised as saints. Writers are so seldom happy with another person that when they are, their partners are worshiped.

I think normal people are the types of people who don't think they will ever find anyone or who think that the whole marriage thing will never happen to them. That's why they always end up married. Writers keep trying for something they know is there for them as long as they keep looking, they keep having dramatic breakups of passionate relationships, they keep crying to the moon in the middle of the night surrounded by broken bottles and storefronts. But that's all. All passion, all substance, but nothing that ever turns into anything that will last. So they try again with all the zeal they had previously, and it burns up again like pine needles in a bonfire.
Posted by Sky Jack Morgan at 12:11 PM

"they keep having dramatic breakups of passionate relationships, they keep crying to the moon in the middle of the night surrounded by broken bottles"

Diana forces tears from every artists eyes from time to time.