Jack Morgan was Once a Sexy Young Poet in Germany 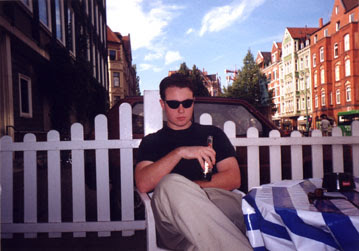 Ten years ago, I didn't know the difference between spoken word and poetry. I knew that slam was different, but I thought that spoken word was kind of a catch all phrase. Now people who are part of one make fun of those in the others. But in nineteen ninety-nine, things were very different. . . for me at least.

I was nineteen, living in Germany. I had gotten a dream job as an art director for an advertising agency. Even then, I seldom slept, so I went to jazz shows. Hannover, Germany is kind of known as a jazz mecca in Europe. I wanted to get more involved in the nightlife of Hannover, so I went out every night. Soon, I D.J.'d a couple nights a week, promoted parties at clubs, and started what I would now call a reading series. My reading series was called "Be Smart: Jazz and Spoken Word with Jack Morgan." Jazz musicians and poets spoke English, so many of them were my first acquaintances and friends. A friend named Mirko got most of the bands and played the double bass, and I got some poets, and I read a lot. It was held in a subterranean nightclub called Golden Planet. For a while, we were happy. We all felt successful and famous. We worked the door and spent time on stage and even bussed tables and served drinks. We stood in the city center handing out flyers to passersby. People in the city knew who we were. It didn't last long, but it was good to be a young poet abroad. I am glad that I knew so little about the way things work.
Posted by Sky Jack Morgan at 11:00 AM