You Can Say You to Me 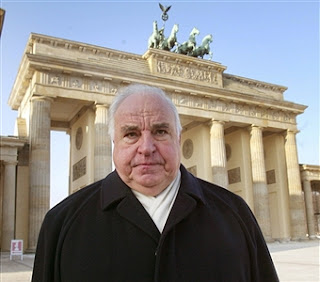 There's a legend in which Helmut Kohl told Bill Clinton "You can say you to me." I remember laughing about this friendly little gaf. See, in the German language, they still have the familiar pronoun. "Thou" is in the ashcan of English antiquity, but it survives as "du" in modern German.

So when a German says "you can say you to me," he's inviting you to be his friend. And who wouldn't want to be Helmut Kohl's friend? He promoted peace, unity, prosperity for 16 years. His accomplishments include unifying Germany and ushering in a pan-European currency!

And he was a conservative!

The reason I'm thinking of Helmut Kohl and his funny little (alleged) language error is our own conservative party in the USA.

Everything is vitriol now. "I'm a genius." "You live in a shithole." "That guys sucks his own cock." "That guy is a fucking idiot." It's exhausting. Where's the basic human decency?

I'm a progressive. But I've agreed with some conservatives. High-functioning humans in politics are complicated, and you can agree with some of their views without accepting all of them. But these days conservatives are two-dimensional caricatures obsessed with cheap insults and bad manners.

Helmut Kohl was at times brutal in his politics, but wanted to be your friend. He wanted everyone to be friends. He convinced Reagan to visit a German military (NAZI) cemetery in the name of friendship!

And after he left office, he was humble and introspective and reflected on his own political tactics, admitting that he at times acted like a dictator in the name of peace.

Here's more about him:
Wiki »
Acted like a Dictator »
Cost of reunification »


As a caveat, I'd like to offer this anecdote:

Yesterday at work a couple of women ate lunch and in the end, after eating everything except their ceviche appetizer, told their server that they "tried everything in the world to make this taste better, but it tastes like shit." They didn't want to pay for it.

They could have said something like "I'm sorry, but I didn't enjoy this, and I'd prefer not to pay for it." Why be vulgar for no reason? Why begin with conflict?

The ceviche was covered in hot sauce and salt as a result of their trying to make it "taste better."

I'm guessing they were not Trump supporters. But what the president and his ilk are accomplishing is a drastic diminishment of how we interact with one another. And I think it's important to have a culture of dignity and respect.

I resisted the urge to ask them if that's how they talk when they go to someone's house.
Posted by Sky Jack Morgan at 2:32 PM