Starkiller Base Is the DUMBEST Thing in Star Wars History


You already know about Starkiller base, the First Order's planet-sized space station/weapon/Macguffin. It's by far the dumbest thing in Star Wars canon, and one of the dumbest things in Sci-Fi history.

It destroys Coruscant and all of the planets in its system. There's some debate to that statement, but it doesn't matter here for my purposes. They definitely destroyed five planets.

There are only a few ways for this to occur:

They didn't build it from scratch.

Maybe they weaponized an existing planet.
How do you weaponize a planet without the neighboring planets not noticing. It has a breathable atmosphere and trees growing on it. No one wants to live there? Did they just kill everyone already living there and drill into its core to create a superweapon that converts star energy into ammunition? How do you test that without destroying a star? The worst part of that plan is that it's a one-time-use weapon. You just get to destroy one solar system and then have to abandon the planet or try to use it as a base of operations until the debris from all the exploding planets destroys it. Planets don't travel from one system to another.

They built it far away.

How do they get it close enough to target and destroy the solar system? There are several projectiles travelling slowly enough for lens flares and for Kylo Ren to behold the impending destruction from a window. Consider it takes months to get to Mars, and that's only possible every other year. Even if these missiles "blast through hyperspace" (which is not what we see in the film) the movies have established nothing can be tracked/targeted through hyperspace. So, unless they want to fire these interstellar missiles and wait around for potentially years to see if they land properly, they're not going to shoot from too far. But that means they need to move this space station unfathomable distances to get into range.

Now, range matters. Star Wars weapons have ranges, and vehicles have fuel ranges, too. How much fuel would it take Starkiller base to travel from one star system to another? All the other ships that are jumping in space have visible blue exhausts. Not Starkiller. It's simply not built for travel.

It has to be super-long range weapon. Its size makes it able to launch plasma ridiculously long distances and it houses boundless computer capacity to target very faraway places. And the First Order is incredibly patient. That would be like the USA launching missiles at china and waiting 20 years for them to hit their marks. That's a long time to hold a grudge.

Distance in space is usually overcome in Sci-fi by faster-than-light drives, subspace mumbo jumbo, wormholes, warp-speed, teleportation, etc. It's a necessity that some universes ignore (Firefly) to their detriment. Sci-fi has to do some work your brain won't in the suspension of disbelief. Star Wars used to not give a shit about what you thought about anything. But they've since talked about midichlorians and kyber crystals. And they always had the Force (which is just magic) and hyperspace (which is just sci-fi magic) to dismiss the impossible.

Anyway, the Starkiller base is idiotic, and anyone saying this movie was superior to episode VIII or any other Star Wars movie should start thinking about why they like these movies in the first place. They're stupid, bad movies we like despite all that. They're Fast & Furious in space. It's OK to like garbage. Garbage is fun sometimes. 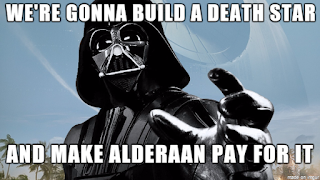 Let's say they built a planet-sized weapon in the same solar system they were bent on destroying even though Hux says they're attacking planets in a system far away. How did its construction go unnoticed? The whole solar system thought it was normal somebody was building a whole new planet? Cloak?  That would still throw off the tidal patterns of nearby planets. It's simply impossible for the thing to have been built anywhere near their intended target. Meanwhile, the natural resources involved in building your planet would mean basically dismantling an entire world, to create a new weaponized one. So we have to take Hux at his word here.

Abrams can't function without an explanation-free MacGuffin. That's his power over his audiences, and he wields it with frustratingly successful results.

I always imagined that the Death Star could move faster than light. You don't see any blue engine burns on the Death Star either, but maybe you just never get to see them in the movies. How would Alderaan not see it coming? It'd have to jump in and destroy and then refuel or recharge and jump to its next destination. Maybe that's why it just sat around waiting for the rebels to attack it; it wasn't able to escape the scene of the crime back to its secret location in time.

Kyle Hill has a fun article about Starkiller base here »
Posted by Sky Jack Morgan at 3:45 PM