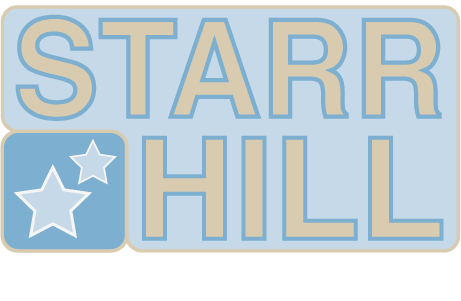 Sometimes it's fun to take a logo and redesign it in such a way that takes the branding in a completely new direction. I spend a lot of time thinking about brewery logos and branding, and I started thinking about Starr Hill's logo. It's a giant star that looks like a sheriff's badge from the wild west. I like it. It's simple, bold, immediately recognizable. I'm not trying to "improve" anything (just as a disclaimer). I'm a fan who wants to reimagine the corporate identity of one of my favorite breweries.

Anyway, here's what I was thinking: Blue Ridge, nighttime music festivals, soothing, modern, and military.
The star always looks a bit military to me. I used a camouflage swatch set to come up with the color motif. I want more than one star to give us the idea of a good night and even a little magic (think a sorcerer's cap). I kept all caps on the logo for strength, but I used Helvetica to make it simply modern. I think it's a good contrast with the rounded corners of the bounding box. It makes the beer look accessible and easy. It's also fine when it goes black and white with a little help.

I worked the golden mean a bit more than I usually do on this one. Also, I wanted it to be reminiscent of patriotism. . . I'm kind of dancing with the military thing a bit.

Just to restate: I am not criticizing Starr Hill's logo in ANY WAY. Think of this like you would Twilight fan fiction. I'm just a fan having fun with design.
Posted by Sky Jack Morgan at 10:18 AM