You should watch Prisoners 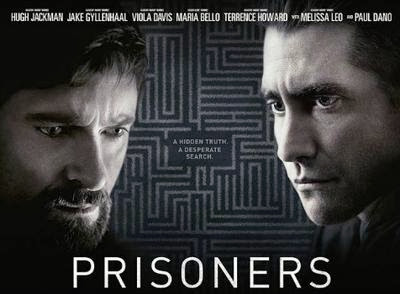 Great performances by everyone. Prisoners explores how a crime can turn everyone into criminals, as if demonism is something contagious, and the more the lines between right and wrong are blurred, the more evil or wrong a person becomes.

Hugh Jackman is a survivalist nut whose kid is kidnapped by a retarded guy along with his neighbor's kid on Thanksgiving. They find the kidnapper in short order, but the cops have to let him go because of a lack of evidence. So Jackman has to go crazy and torture him until his face looks like a boxing glove.

Meanwhile there's a cop who seems like he was also abused at some point, though only a tick, a ton of tattoos, and a throw away line about being raised in a boys home are all that vaguely point at this. I guess his chosen career might also be a hint. Anyway, I'm convinced that's what the director was going for, especially since so much time is given to how other abused children grow up and how their abuse shapes who they are.

Eventually, we find, in classic noir fashion, that all of the clues, no matter how disparate, are connected, and the mystery is solved. This movie reminds me a lot of Seven. It's so intense that I was exhaling deeply after every scene, not having realized that I had been holding my breath for it all. The nods to noir are many and pretty delightful, but it's directed more like a horror movie than anything else. And it's probably the most frightening film I've watched in 2013.

I really loved this movie and would like to see it again. The Pennsylvania winter as a backdrop made everything almost black and white and more noiresque and kind of more quiet and scary. I thought it was a little weird that there were no Xmas decorations anywhere for the whole movie, and I think the contrast of everyone else still celebrating family and togetherness while this family was crumbling would have added to the anguish of the characters, but maybe that would have contributed to an audience's greater acceptance of the torture of the kidnapper. Anyway, I totally recommend seeing this one.

##spoilers##
The only problem I had with this movie is the person(s) responsible for the kidnapping and killing of close to twenty kids. Their Caligulan goal to turn adults into demons by stealing their children in order to wage war on god is fine I guess, but then why let a few of them go? Because they'd successfully turned them into demons? And also, why not kill the kids right away? Because you're crazy? OK, but then why drug them and make them do mazes? To make them crazy before you kill them? That doesn't make any sense. And the husband of the killing team! once he has misgivings about having killed all these kids, goes to the molester priest to give his confession? Of all the people you want guidance from as a crazy killer waging war on god by killing children, you go to the child molester priest? And how did the black kid escape? She could just run better when they were being moved? Ok, also the last maze is unsolvable, so how did the copy cat kid get away? And if you know your war on god is going to shit, why not just kill the kid and her father right away? You have a gun. Just shoot them both and bury them. Why go through the whole get in the hole while I inject your kid with poison in the house routine?
The answers to all of these questions could just be "it seemed scarier to do it the way we did it," and the filmmakers would be correct.
Posted by Sky Jack Morgan at 5:47 AM