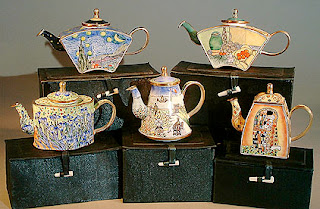 I've been thinking a lot about tea in America. I've been thinking a lot about how Americans drink and maybe just how Americans are.
Before beer and wine and spirits and tea and cola, there was water. Just like animals, the only thing we drank was water, and it was by far the most important thing humans did. The first non-water drinks people got hold of was considered magical or to at least possess supernatural powers and a connection to gods and the cosmos.
Ancient people drank from shared vessels with long straws, and rituals were built around drinks. The vessels were held aloft in a gesture of thanks or offering to the supernatural. Then people shared drinks.
Unlike food, drinks can actually be truly shared. When everything is coming out of the same pot, it's not like cutting up pieces of bread or pizza, where everything is unequal and maybe you got an extra mushroom on yours and I didn't get as much onion on mine. Everything in the pot is the same when it comes to liquid, and when we're drinking from straws, we are literally drinking the same thing.
Eventually ceramics and glass and silver became more readily accessible, and people were all able to afford to drink from their very own cups. When people drank, though, they did it together and when they had their own cups, they raised them up like they did shared vessels and then clinked them together as gesture representing that what they were drinking came from a single vessel.

Drinking is a magical necessity of life. And it's something that we build our cultures around. Everything else can be put on hold as long as you keep drinking. Without drinking, you're dead.

Tea, is still drunk today–for the most part–out of a shared vessel that is displayed on or around the table. If you drink alone, it's still great, but not the same. And this brings me to Americans...
Americans like things in their OWN cups that they pour THEMSELVES. Approximately 85% of tea drunk in America is iced. They drink it in bottles from 7-11and big cups from Hardy's. This separates them from an important part of their humanity because it turns them into islands separated by liquid rather than members of a community that's connected by drink. Drink brings us together, don't let big businesses and corporations and politicians and other interests keep us from that. Share a bottle of something today. Share a pot of tea. Share a carafe. Whatever it is, do it with someone else and have an experience.
Posted by Sky Jack Morgan at 8:19 AM