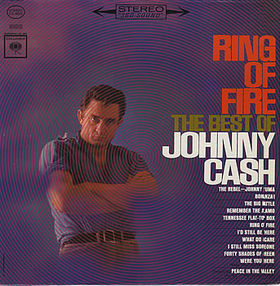 I've now listened to almost all of Johnny Cash's body of work. At first I wanted to listen to every album and write a blog entry about each one, but that became a little too extreme for what I wanted to do. And, I hated just about every album. Each one followed a pretty close formula: an old cover, a new cover, a couple originals that sound like covers of Johnny Cash originals, and something Christian. Johnny Cash was all things to all people. It's remarkable that he was able to criticize the country, be an outlaw, be an American chauvin, a bad ass, a black-wearing drug addict, and a super Christian. And then, to top it all off, he was able to be a renegade and still make Taco Bell commercials. No one, and I mean no one would get away with that shit today. No one ever believes me when I tell them about the Johnny Cash Taco Bell thing, so here's the video. Willie Nelson did one, too.


But despite my hating pretty much every albums as an album, I am still a Johnny Cash fan, and I would list him as one of my biggest influences. Since Johnny Cash is all things to all people, I have to sift through all the Christian stuff (he sings BIBLE TRAIN and has a whole album of hymns his mother taught him) to get to the stuff that I think is quality. Cash had the ability to turn some old Marty Robins tune and turn it into something relevant today, and he was able to take songs we've known for only a few years and turn them into classics that seem to have been with us forever.

Basically, Johnny Cash was the gate keeper of the American music canon. For that, I can deal with his creepy Christianity and his tacky Taco Bell.
Posted by Sky Jack Morgan at 9:33 AM


Here's this, in case you were looking for the Willie Nelson video.