Living in Staunton while Fighting with Wife 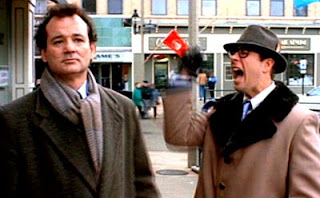 Men and women fight. They have bad days for whatever reasons and then
one treats the other like shit, and then they fight. That fact of life
would not be so difficult to cope with were I not living in Staunton.

I feel like I've tried to make the best of living here. I worked in
theatre, started a magazine, managed a political campaign, threw my
name in for city council, had 2 telephone interviews and an all-day
interview with a freaky corporation, helped start the Staunton Young
Dems... I've done a lot. I worked on a carnival and helped at the
cafe. There's been so much going on, and yet, I've got nothing to show
for it. I feel like I'm living in a place where no one appreciates
anything. Where no one cares about anything new or different. Of
course, I'm wrong, but that's how it feels a lot of the time. All
those things I mentioned I've done since living here feel like
failures. Like I'm spinning my wheels.

So when I fight with my wife, I can't stay away from repeating this
question in my mind: "what the hell am I doing in a place that makes
me feel this way?"

I love being in the Murder Bros., but we're all so broke it's hard to
get it all together. I don't want to be living the same day every day
of my life, and there are just no opporunities here... so far.