Have you seen NIGHT OF THE LIVING DEAD? 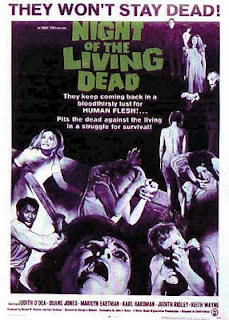 Have you seen Night of the Living Dead?
A hand full of people hunker down in a farmhouse to weather the zombie apocalypse? That's a story worth telling!
"They're coming for you Barbara" is the catch phrase of the movie. Some people say it's the catch phrase that started the popularity zombie movie. I'm not sure about that, but who am I to argue? There are bigger things to argue about with this flick, so let's do that.I've heard a lot of times that George A. Romero wanted to "say something" about race relations with his 1968 movie. Never mind. Who cares? I don't see anything there, and I'm kind of sick of people looking at movies with authorial intent in mind. Sooo, you know what's awesome?

Barbara is killed by her own brother, who's the first person to fall victim to the zombie scourge.

Radioactive dust from space is what's causing all this? Space scared the crap out of people in the 60's. Isn't that quaint?

What's the safest spot in your house should the zombie apocalypse occur? Discuss! That should be an assignment in high school classes. Everybody should understand the strongholds of one's domicile.

The zombies are scary as hell. They don't make noise really, they aren't fast, they don't have a ton of makeup, but they're haunting.

An ending that makes you go "man!"
If you haven't seen this movie, you owe it to yourself to see it. If you have seen it, watch it again. There are things in there that still surprise me even after having seen it a dozen times. It's like Hamlet that way. 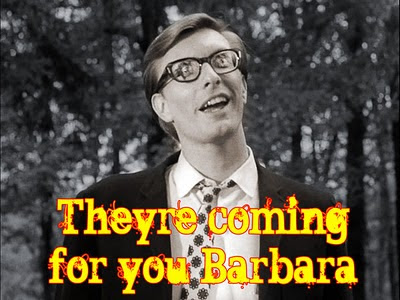 All in all, I like this zombie movie over all the others I've seen, and I've seen a lot. There's something to its simplicity and its subtlety that lends it some class. It's funny in its own way without trying to be funny, and for the most part the story's told straight. It trusts its audience, and it trusts its actors, and I think, though it in many ways redefined its genre, trusted its genre in a way that most zombie and horror movies don't.
Posted by Sky Jack Morgan at 6:27 AM