The Economy might be in the Crapper, but there Are Lessons in "Escape from New York" 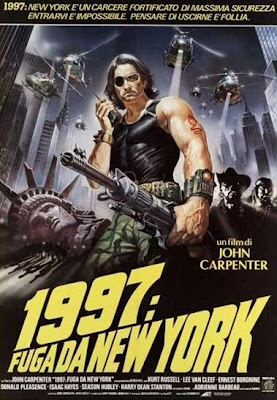 I think someone was having a laugh when they were painting this picture of Snake. 1997 doesn't sound very futuristic right now, and we obviously didn't mess everything up to the degree that Escape from New York depicts. This is very reassuring right now.

Lately I have been afraid of the economy. It is out of my hands completely, and it seems like it is going to turn us all into scroungers and pack rats who save jars and string like people did in the last depression, living in the backs of their Packards. I've been worrying about living through another riot, and I've been thinking about what it will be like if the doomsday scenarios the media and the politicians have been painting actually come to pass.

It's strange that we don't trust the media or the politicians until they start telling us that we need them so badly that the world will collapse without them. CEOs of mega corporations and banks are telling us things that make us think twice about dismissing them as liars and thieves. They're all talking about 700 billion dollars like it's no big deal even though for the last fifty years they've been saying that hunger and poverty are incurable in this nation and that healthcare for everyone is too expensive. Doesn't it seem a at least a little weird that we're even talking about freeing up 700 billion dollars to hand over to the very people who have been screwing every American man, woman, and child they could? The last time we were talking about this type of thing, the Gipper was prez, and his VP G.H-W. Bush was running. The time before that, a Republican named Hoover was touting bailouts and tax cuts for the rich. The Democrats are not perfect, but the Republicans have the worst track record in history on this sort of thing.

But even if McCain wins, we probably won't end up like Snake and his dilapidated NYC. The fear of such a thing is very real, but we'll probably look just like Kurt Russel at the end of all this, kind of silly.

Nixon, Ford, Reagan, Bush, Bush; those are the Republicans in most voters' living memories. When did that party win the trust of the American people? No wonder dystopian futures are so frightening--you see a trend where people continually put their fates in the worst possible hands, and it starts to look like we're never going to make it to see 1997. I've been freaking out about the future of the country and the world. Writers are the first ones to starve and the first ones to get executed when nazis take over. Escape from New York is where I find solace. If people thought that that was what 1997 was going to look like, I am probably wrong, too. Breathe easy and everything will work out.

If Sarah Palen becomes president, though, Snake save us all!
Posted by Sky Jack Morgan at 1:25 AM